The rise of CUFI 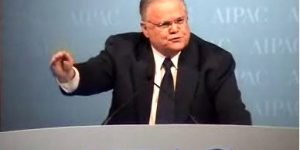 “It’s a new day in America. The sleeping giant of Christian Zionism has awakened!” Pastor John Hagee announced in his booming voice to thunderous applause at the AIPAC Annual Policy Conference last March. What Hagee humbly omitted is that Christians United for Israel (CUFI), a group he formed just over a year ago, deserves much of the credit for arousing the sleepy 50-million-man giant.

To be sure, Zionist Christians are no recent phenomena. Neither is their communal work on behalf of Israel. For the last century, there have been Christian groups supporting Israel through their pocketbooks, prayer, and political power. What changed with CUFI is the visibility and consolidation of the Christian Zionist network. CUFI’s stated purpose is to “provide a national association through which every pro-Israel church, para-church organization, ministry or individual in America can speak and act with one voice in support of Israel in matters related to Biblical issues.”

CUFI, in a short period of time, has become one of the most important Christian grassroots organizations in America. Hesitant to call itself a lobby, preferring the term ‘national association,’ CUFI is often described as a Christian parallel to the Jewish lobbying-giant American Israel Public Affairs Committee (AIPAC).

With the goal of educating and mobilizing Christian support for Israel, CUFI’s signature event is the annual Washington Israel Summit in July. At last year’s Summit, 3,500 Christians convened on Washington to lobby their senators and congressmen on pro-Israel legislation. For this year’s Summit, taking place 17 July, Hagee hopes for twice as many.

In forming CUFI, Pastor Hagee envisioned a united evangelical-Jewish alliance standing in defense of Israel. In his words, Congress must know “that the matter of Israel is no longer just a Jewish issue; it is a Christian-Jewish issue.” For an interfaith alliance to take hold there must be enough Jews who are willing to take CUFI’s hand in friendship. While Christian love of Israel may be unconditional, an alliance must be mutual.

The response to Pastor Hagee and the rise of CUFI among Jews has been mixed, predictably divided along liberal/conservative lines. Rabbis and Jewish community leaders who see CUFI as a negative development are generally more liberal in their domestic and foreign policy agendas. Those Jewish voices to the right are extremely optimistic about the surge in Christian support.

CUFI’s greatest moment of acceptance by the Jewish community was Pastor Hagee’s invitation to speak at AIPAC’s national convention. AIPAC broke policy by having Hagee come for a primetime slot. His impassioned speech brought standing ovations and ended with Hagee leading the crowd in a chorus of “Israel Lives!” The speech was widely covered in the press and repeatedly downloaded via the internet. It brought an enthusiastic response from Jews and Israelis that extended far beyond the walls of AIPAC. Bloggers in Israel sat by their computers crying as they heard Hagee’s words. They realized Israelis actually did have friends in the world. Jews in the U.S. said they needed more leaders in their own communities with half the ardor of Hagee and his Christian Zionists.

Not all those in the Jewish community, however, have seen Hagee’s newfound popularity as a good thing. Rabbi James Rudin from the American Jewish Committee criticized AIPAC for “being so focused on the tactical support offers” and ignoring his apocalyptic claims. Daniel Sokatch with the Progressive Jewish Alliance warned, “To get in bed with the hard Christian right on Israel is a dangerous path.”

Eric Yoffie, president of the Union for Reform Judaism wrote a critical article for the Jewish Daily Forward entitled “When we Let John Hagee Speak For Us.” Yoffie claims the closer the organized Jewish community becomes to Christian Zionists, the further away they push younger, more liberal, Jews. The acceptance of right-wing Christian leaders like Hagee might alienate those Jews who are more moderate on the Israeli-Palestinian issue. Yoffie says Jewish organizations should rethink their embrace of Hagee and the supportive role they play in CUFI’s “Nights to Honor Israel.”

For most Jewish critics of CUFI there is a deep-seated fear that accepting Christian support for Israel means condoning evangelicals’ opposing religious and political beliefs. CUFI executive director David Brog, himself Jewish, claims that CUFI is a one-issue organization. For Jews and Christians to be partners in the coalition they need only agree on the point of collaboration—Israel.

While debate rages in liberal Jewish circles, there is a notable absence of discussion in the Christian Zionist community. A knee-jerk reaction would be for pastoral circles to ask whether it is in Christian interest to forge an alliance with Jews who have divergent beliefs and agendas. But such a question is irrelevant. Christian Zionists are following a biblical command to love and support the Jewish people and the state of Israel. That love is unconditional.

The new beginning for Jewish-Christian relations is still burdened by 2,000 years of baggage. Rabbi Irving Greenburg in his book For the Sake of Heaven and Earth said “the rearticulation of Christian attitudes toward Judaism and the determination to end the teaching of contempt toward the Jewish religion already constitute one of the great moral cleansing revolutions of all time—in any religion.” Christianity underwent great pains to make things right, breaking with so much history and tradition to purify itself from the evils of anti-Semitism.

If some Jews remain uncomfortable with robust Christianity it is understandable. Christian Zionists must be patient, bearing out consistent genuineness and unconditional love until the wounds are healed. The Christian hand of friendship must remain outstretched to God’s chosen as long as some, or even one, grab hold.