Fire balloons in Jerusalem: Will arson terror spread to all of Israel? 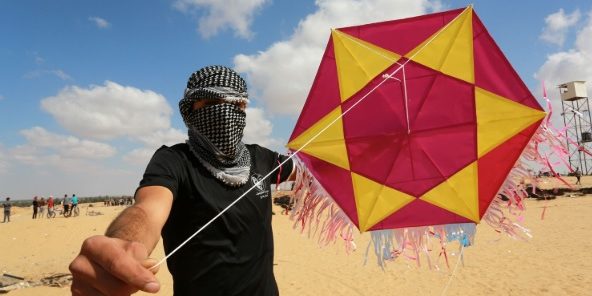 A fire balloon was found for the third time in a week in Jerusalem, this time in the southwest neighborhood of Ein Kerem, raising fears that Gaza’s arson terror will spread to the center of the country.

In addition to Jerusalem, balloons tied to flammable materials were recently found in Rishon Letzion, Bat Yam and Givat Brenner near the coast, and in the cities of Modi’in and Beit Shemesh in central Israel.

“The police department has advised that, due to changing weather conditions, Molotov balloons and explosive balloons sent from Gaza have been spotted in areas much farther than before,” a medical first-response group in Beit Shemesh said in an alert on Sunday.

“The police urge that all residents be aware of found balloons lying on the street, in yards, or in trees,” the alert warned.

Gaza source doubtful
Security officials believe that the balloons originate from Judea and Samaria, and not from Gaza, which is situated tens of miles away from the targeted cities.

A police source noted that a balloon was found earlier this month in the backyard of a house in Givat Ze’ev, a Jerusalem suburb. Givat Ze’ev is situated adjacent to several Arab neighborhoods.

The incident is in line ‎with several similar cases ‎in Judea and Samaria, he says, indicating Palestinians from the territories may be trying to mimic the Gaza attacks by launching incendiary ‎balloons into central Israeli cities. Continue Reading…