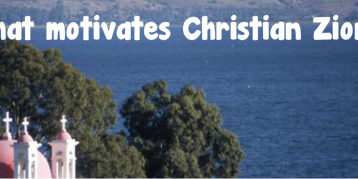 Where I got those stereotypes is no mystery. Any time you hear interviews with prominent Christian Zionist leaders, certain questions are guaranteed to come up:

“Gary Bauer from American Values, tell us why evangelicals are so eager for the apocalypse?”

“Susan Michael from International Christian Embassy Jerusalem, is church support for Israel merely a tool to convert the Jews?”

“Earl Cox from Israel Always, do Christian Zionists only support Israel to realize the scenario of Armageddon?”

The answers to these questions rarely matter. The question itself attempts to unmask alleged conspiracies of Christian Zionism and expose ambiguities in the alliance between pro-Israel Christians and Jews.

Skeptics of the Jewish-Christian alliance question this seemingly tenuous relationship. They assume the worst motives from both parties to explain away the alliance. Christian Zionists support Israel to speed Armageddon and the return of Christ. Jews use Christian Zionists to further their pro-Israel aims.

I am not one to hold judgment here. If I—daughter of an evangelical pastor—had so many misconceptions about Christian Zionism, I expect others to as well.

Therefore, I consider it my duty to assure the skeptics that Christian Zionists have no ulterior motives. As Vice President of a major pro-Israel Christian organization, I have been to dozens of Christian Zionist meetings. Never once have I heard talk about pushing Israel towards its doom just so Jesus will come back. I have never heard scheming about mass conversions. And as a natural cynic, I have been listening for it.

Here are the real motives of Christian Zionism: repentance, thankfulness, and obedience.

Repentance for Christianity’s long history of persecuting Jews. Thankfulness to the Jewish people for Christianity’s spiritual inheritance. Obedience to the Biblical commands to bless Israel. These three tenants best expose what I call the “Jewish heart” of Christian Zionists.

Anti-Semitism started early in the church out of a desire to separate Christianity from Judaism. As the Roman Church gained power this desire for distinction evolved into oppression. At best Jews were forcefully converted; at worst they were burned at the stake.

Persecution was excused by blaming Jews for the death of Jesus. Even more so, persecution was justified on the basis of a false teaching that said when Jews rejected Jesus, God rejected the Jews. This prevalent belief is known as Replacement Theology. Replacement Theology teaches that God has cut his people off from the covenants and has no future plans for the nation of Israel.

Of course, Replacement Theology has a tough time explaining the supernatural survival of the Jewish people and the miraculous rebirth of the nation of Israel after almost 2,000 years.

Christian teachings of contempt fed the fires of anti-Semitism for centuries. It took the horrors of the Holocaust to finally bring Christians to their knees, in spiritual humility repenting of the sins committed against the Jewish people.

Christian Zionists in the twentieth century started a theological revolution in the Church to redefine the relationship between the Church and Israel. The first steps were to reject Replacement Theology, recognize Judaism as a living religion, and embrace the fact that God’s covenant with the Jewish people is eternal. It’s a simple acknowledgement. When God says “I will make an everlasting covenant with them,” he is talking about the Jewish people.

Christian Zionism has since become a loud voice against anti-Semitism. We now stand in support of Israel as a way to right our wrongs. Our aim is to turn afflictions of the past into blessings of the future.

Old accusations of Jews being Christ-killers have given way to thanksgiving to the Jewish people for the Bible and Mosaic Law. Pro-Israel Christians want to appreciate our Jewish brothers and sisters for passing down the fundamentals of the Christian faith, especially since in the past this debt has been ill repaid.

Jesus, born a Jew, lived an observant Jewish life. According to the New Testament, Jesus kept the Sabbath, wore tzi tzi and celebrated Jewish feasts and festivals. We have no idea what Jesus looked like but the one thing we do know about his physicality is that he was circumcised. For many Christians, Jesus’ Jewishness is an attribute often disregarded and definitely not highlighted.

Of course, it doesn’t stop with Jesus either. The prophets, patriarchs, and authors of the bible were all Jewish. The disciples and the Apostle Paul were Jewish. Pastor John Hagee, founder of Christians United for Israel, often quips that “out of all the authors of the Bible, there wasn’t a Baptist in the bunch.”

80% of the Christian Bible was written in Hebrew, by Hebrews, for Hebrews. Fundamental Christian sacraments such as communion and baptism are Jewish in origin.

Loving the Jewish people out of repentance for the sin of anti-Semitism and thankfulness for our spiritual inheritance are not theological motives but moral ones. Theology, however, is the greatest driving force behind Christian Zionism. Religious belief is what mixes with and reinforces Christians’ moral reasons for supporting Israel.

Christian Zionists emphatically believe they have a Biblical responsibility toward Israel and the Jewish people. In Genesis, we find the cornerstone of Christian Zionism when God tells Abraham: “I will bless those who bless you, and those who curse you I will curse.” Isaiah gives them their call to action: “Comfort, yes, comfort my people says your God…speak tenderly to Jerusalem”.

The commands to bless and comfort Israel are given to all peoples but according to the Apostle Paul Christians have additional obligations. There is a whole chapter in the New Testament book of Romans where Paul talks about Christian’s unique responsibility toward Jews. Paul wrote: “if the Gentiles have shared in the Jews spiritual blessings, they owe it to the Jews to share with them their material blessings” (Romans 15:27). Christian Zionists take this passage and similar ones as a direct command to provide for Israel’s needs.

How do they do this? Christian support of Israel usually comes through one of three resources: money, prayer, and political power—none of which are in short supply. Over the last twenty years, Christian Zionists have given hundreds of millions to support Aliya, aid victims of terror, and provide for Israel’s poor. Whether privately at home or with large groups at church, Christian prayer for Israel is happening around the clock. And Christian Zionists even in the last few years have grown more savvy and organized on the political advocacy scene.

There is a movement among Christians today. Christian Zionism is growing as believers are getting more educated and informed about the plight of modern Israel. Christians are coming to realize that Israel’s story offers a chance to see God’s hand at work in the world today. The conservative estimate of Christian Zionists in America is around 15 million, a third of the evangelical population. This movement is going mainstream and I’m so thankful to be part of it.

“Shelley Neese from Jerusalem Connection, what motivates Christian Zionists, like yourself, to support Israel?”

We believe Israel is a fulfillment of prophecy and evidence of God’s faithfulness. The survival of the Jewish people, truly against all odds, is proof of God’s fidelity. The birth of a Jewish state is not a political coincidence or a grand social experiment. It is a miracle. For Christian Zionists, if God ordained the creation of Israel, and defends Israel, then those who fight with Israel are on the right side.

To Jewish friends reading this, or skeptics who cannot accept this progression of thought, I say that today is a new day and we are a new generation of Christians. American Jews may be weary of a partnership with Christians because of religious differences, disagreements on domestic politics, or a tortuous history that time has not yet healed. However, in matters relating to Israel, Christian Zionists and Jewish Zionists are the most natural of allies. Our motives are pure, our actions are telling, and our offer of partnership is genuine.