When Cultural Appropriation and Historical Revisionism Are Acts of War 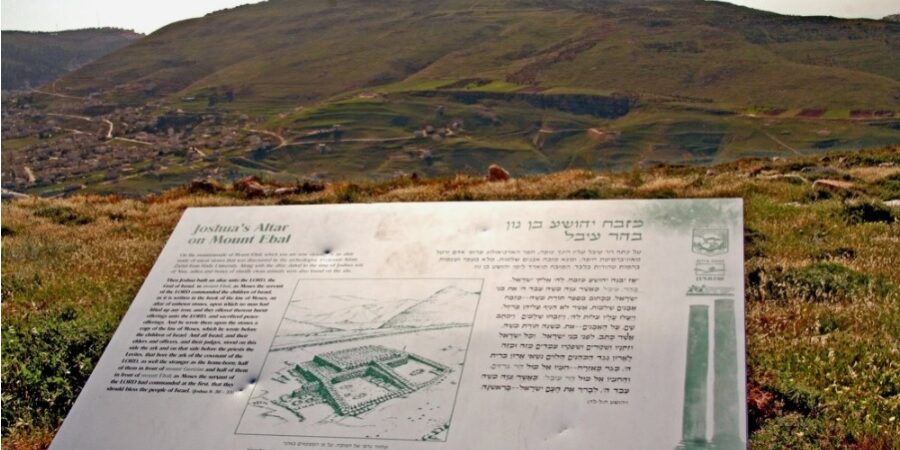 Two weeks ago, a bus filled with veteran Israeli generals from the Bithonistim, a grassroots national security organization, slowly made its way up the slopes of Mt. Ebal in Northern Samaria to visit a biblical-era site that was severely damaged by a Palestinian Authority contractor in late January.

They came to draw the public’s attention to the strategic implications of the war the Palestinians are waging against Jewish history.

The site was excavated between 1980 and 1989 by the late Professor Adam Zertal, who identified it as Joshua’s Altar as described in the Books of Deuteronomy, (27; 1-9) and Joshua (8; 30-35). The animal remains at the site contained thousands of burnt bones of year-old male, exclusively kosher, animals. They were burned in an open flame 3,250 years ago—the time generally identified as the period of ancient Jewish settlement of the Land of Israel under Joshua. Other remains found at the site included earrings and scarabs made in Egypt at the time of Ramses II, the Egyptian pharaoh often associated with the story of the Exodus from Egypt.

As Zertal explained in a lecture in 2013, the altar was buried under a layer of rocks, in keeping with Jewish prescriptions for preventing the desecration of abandoned holy sites. In keeping with the biblical narrative, the altar is made of unhewn stones; instead of steps, there are two ramps for the priests to alight to the platform—blocks of plaster were found nearby. The altar at Mt. Ebal also matches a Talmudic description of an altar from the Second Temple period, around 900 years later, indicating a continuity of Jewish practices throughout the biblical period.

Although initially controversial, Zertal’s general finding that the site is around 3,300 years old and is a Jewish historical site, where sacrifices were carried out in keeping with biblical guidelines, has become widely accepted—although many continue to dispute the specific identification with Joshua.

In late January, the Palestinian Authority (PA) posted a video on its website of 60 meters of the ancient wall surrounding the altar being destroyed to pave a road connecting the Palestinian village of Asira ash-Shamaliya to Nablus. Nablus, built on the ruins of the biblical city of Shechem, is located in northern Samaria between Mt. Ebal and Mt. Gerizim.

Zertal was a fiercely secular son of hardcore socialists. Yet, he explained in a 2013 lecture, his scientific work compelled him to accept that the biblical narrative “from Deuteronomy through the Books of Kings was historically accurate.”

“There are people who refuse to acknowledge that the damage done here was deliberate,” Major General Gershon Hacohen explained to Newsweek. “That since it was the surrounding wall—rather than the altar itself—that was destroyed, the altar wasn’t harmed. That’s like saying that if someone destroys the steps to the Acropolis, they aren’t harming the Acropolis. It’s the same complex.”

“They also say the Palestinians weren’t trying to damage the site—they just needed stones for their road. But look at this place,” he said and waved his hand across the landscape.

The slopes of Mt. Ebal are strewn with loose rocks.

“If they needed rocks for the road, all the Palestinians had to do was bring up a truck and take as many as they needed. Instead, they brought a bulldozer all the way up here and deliberately destroyed 60 meters of a 3,250-year-old wall.”

As if to prove Hacohen’s point, this week, a group of Palestinians was filmed barbecuing on the altar itself. Continue Reading…