In Germany, Rivlin calls for unified voice against Iran 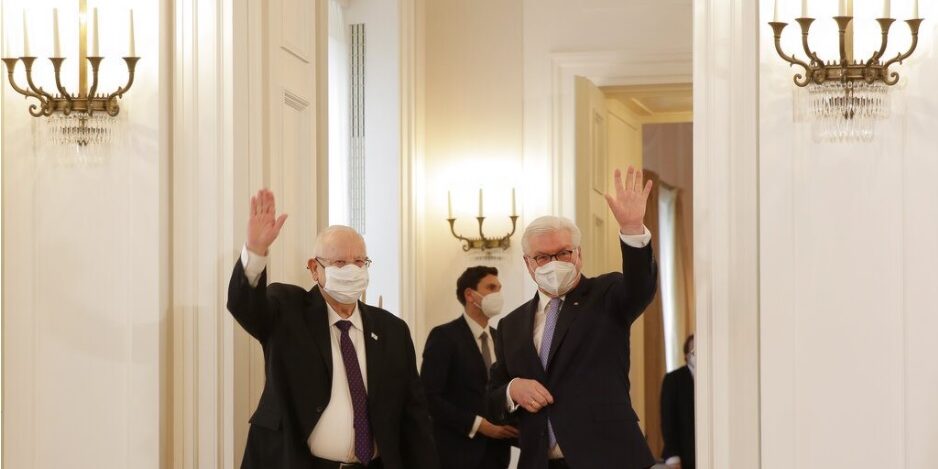 By Lilach Shoval and ILH Staff—

The world must speak out in unison against Iran’s nuclear aspirations and support for terrorist groups in the Middle East, President Reuven Rivlin said in Berlin on Tuesday at a joint press conference with German President Frank-Walter Steinmeier.

Rivlin, who will also visit Austria and France to meet with their respective presidents, hailed the US-brokered Abraham Accords for bolstering the moderate voices on the region.

The president is being accompanied by IDF Chief of Staff Lt. Gen. Aviv Kochavi, who will brief European presidents on security matters

The president stressed Israel’s appreciation for Germany’s commitment to Israel’s security, regional stability and the important strategic relations between the countries, but singled out Iran as trying to undermine Middle East stability and using “nuclear blackmail” to secure the removal of economic sanctions.

He added that Israel attaches great importance to setting out red lines for Iranian conduct that will prevent further development of its nuclear program.

Rivlin expressed hope that the dramatic changes to the region’s geopolitical landscape would have an impact on the Israeli-Palestinian conflict as well, triggering a new round of peace talks. He said the COVID-19 pandemic proved that borders are artificial and that cooperation between Israel and the Palestinians is crucial since their lives are inextricably linked together.

He called the ICC investigation a “scandalous” decision and thanked Germany for opposing it.

“We are proud of our soldiers, our sons and daughters, grandsons and granddaughters. They protect us from our enemies and we will protect them from this decision,” the president said.