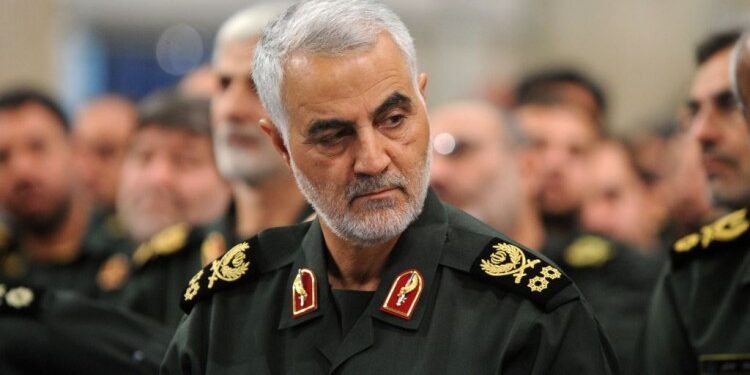 While many Palestinians hold Iran’s slain military commander Qassem Soleimani responsible for committing massacres against Palestinians and Arabs, especially in war-torn Syria, the Palestinian Islamist groups Hamas and Islamic Jihad are continuing to heap praise on him for supporting their anti-Israel terrorist activities.

Soleimani, former commander of Iran’s Quds Force, was killed in a US drone attack in Iraq on January 3, 2020. Many Palestinians and Arabs have denounced Soleimani as the “murderer of hundreds of thousands of women and children” in Syria, Yemen and Iraq.

The Iran-backed Hamas and Islamic Jihad have marked the anniversary of his death by hanging large billboards with Soleimani’s picture in some areas of the Gaza Strip. The two terror groups say they miss Soleimani, whom they describe as the “martyr of Jerusalem.”

The billboards have provoked many Palestinians, including those living in the Hamas-ruled Gaza Strip, who consider Soleimani a terrorist and mass murderer.

Majdi al-Mughrabi, a Palestinian man from the Gaza Strip who reportedly tore down a poster of Soleimani, was arrested by Hamas’s Internal Security Force.

Commenting on the hanging of the Soleimani posters in the Gaza Strip, a prominent Palestinian political analyst, Dr. Ibrahim Hamami, wrote: “There is no justification for hanging the picture of Soleimani in Gaza and glorifying him. He is a criminal who killed innocent people.”

“We know that Hamas has only a few remaining followers in the Arab world because of its affiliation with Iran, Syria and Hezbollah. The hands of Soleimani are stained with the blood of tens of thousands of Syrians and Iraqis.”

Saudi blogger Munther al-Sheikh Mubarak pointed out that while the Palestinians have long been burning pictures and flags of Arab heads of state and countries, they are now punishing those who tear down the pictures of a murderer. “For years, they have been burning our flags and pictures of our leaders, and Hamas didn’t do anything about it,” Mubarak remarked. Continue Reading….