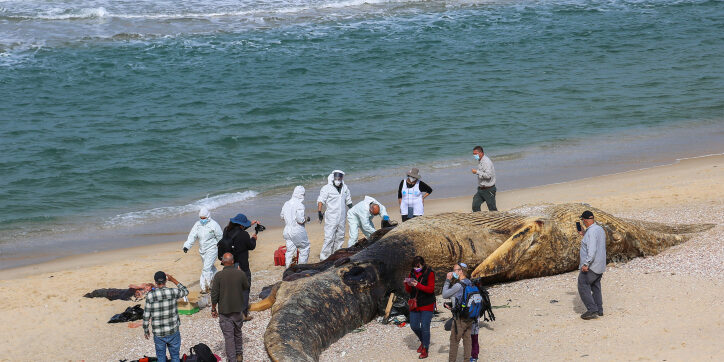 Israeli authorities located the ship responsible for dumping crude oil into the sea which landed and covered the majority of Israel’s beaches.

Minister of Environmental Protection Gila Gamliel announced Wednesday that the ship responsible for the pollution off the coast of Israel was identified.

“We got our hands on the criminal ship. Our long arm will reach everyone who harms our nature, the sea, and our beaches,” she declared. “We located the crude oil tanker that polluted the shores of Israel. It is Libyan-owned and carried cargo from Iran to Syria. We will bring the environmental criminal who polluted the shores of our country to justice, and demand compensation on behalf of all Israeli citizens.”

“This is a crude oil tanker named Emerald, Libyan owned and operated, which carried cargo, in a pirated manner, from Iran to Syria. The ship flies the Panamanian flag. Iran is waging terrorism not only by trying to arm itself with nuclear weapons or to establish itself on our borders. Iran is waging terrorism by harming the environment. Our fight for nature and animals should be cross-border. Together, we will consider the person responsible for environmental terrorism who committed a crime against humanity. We will continue to rehabilitate the damaged beaches and animals that were harmed. Together we will triumph and remove pollution from our country’s shores.”

The ship turned off its tracking system when it was near Israeli waters, when it was dumping the crude oil into the sea.

170 of 190 km of Israel’s coast were covered with tar and damaged in an ecological disaster last weekend, the worst environmental disaster in Israel decades. Continue Reading….