Purim is the holiday when Jews (and many Christians) remember the story of Esther. Esther was an ordinary Jewish girl who became Queen of the Persian Empire. God placed Esther in the right place at the right time. When the evil Haman issued a plan for all the Jews in the Empire to be killed, Esther confronted the King and told him of Haman’s intentions. The plan was reversed and instead of killing all the Jews, Esther’s people were honored.
Purim is a celebration of God’s providence and Esther’s courage. The holiday falls sometime around February or March every year. In 2021, Purim was on February 25th. It is traditional to dress up in costume, eat sweets, and read the story of Esther together with a group of friends or family.

I usually bring my family to the local Chabad to hear the story read at a rapid speed in Hebrew and to celebrate with the Jewish community a holiday that I am committed to remembering each year. When reading the Megillah, every time the readers say the name Haman, the crowd is supposed to boo, hiss, and clang noise makers. It is a clever way to make sure the youngest ears are listening throughout the long story.

Esther understood the risk she was taking on herself by approaching the king and challenging the edict of his vizier Haman (BOO!). However, Esther promised her uncle Mordechai, “I will do all I can to change this.” She asked for prayer and fasting but promised to intervene for her people even if it meant she was killed.
I hope that you find a way to use the holiday of Purim, even retroactively, to celebrate this hero of the Bible, learn from her actions, and make your own commitments to do what is right in the face of evil, to stand by the Jewish people amidst the rise of antisemitism, and to find your own purpose for which you were called. 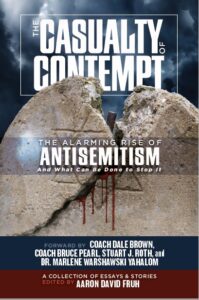 The Dead Sea Scrolls have almost every book of the Bible represented in the caves around Qumran except the Book of Esther. Some have scratched their heads at this to try and figure out why the Essenes did not keep the Book of Esther in their library. The most likely answer is that the Dead Sea Scrolls were a genizah, a repository for holy Jewish texts that had the name of God in print. Esther, however, never has the name Yahweh in its text. So, it would not technically need to be included in a genizah. But the book never needs to spell out the name of God. With every plot twist, with every divine intervention, and appointed hour, God’s hand is all over the story of Esther.

I have been asking all of you with us at Jerusalem Connection for the last year to share with us what you hear the Lord saying to you during this global pandemic. How do we see God’s hand in the strangeness that has been 2020 and now 2021? From what I have heard and discerned from all of you, God has not spoke loudly, but He has led quietly in the still moments of your slowed lives. And though we do not see the exact purpose and path that God has laid out in the events of the last twelve months, we see His handprint everywhere and know that He is working on the macro and micro level, just as he did for the Jews living in exile in Persia.

We encourage you to recognize the resurgence of antisemitism in our time and read the stories of Jews and Christians working together to combat it around the world in 2021. Released this month is the new book, The Casualty of Contempt. There are so many stellar contributing authors, including our very own Amy Zewe, who author the chapter called “When Compassion Goes Awry—Young Christian college students and professionals are abandoning their faith to join social justice causes: An Examination.”

Go to our website and for the suggested donation of twenty dollars, we will send you a signed copy!

Or feel free to mail your donation, with the note Casualty of Contempt, and we will ship your book out.

Please continue to keep Jim Hutchens in your prayers. He has now received the vaccine so he will hopefully soon be able to receive visitors and inch towards normalcy with his family and friends again. Please pray for his physical strength which at times fails him, but his heart and mind are as close to the Lord as ever.