Red Alert: What is Good and What is Bad?

Let us start with the bad news so we can end on a brighter note….

The Biden administration will re-join the UN’s Human Rights Council, reversing Trump’s withdrawal. The withdrawal was due to the antisemitic attacks Israel repeatedly endured when other member nations commit blatant human rights violations, but Israel is the target of the majority of formal condemnations. Here is a peak at the stats: 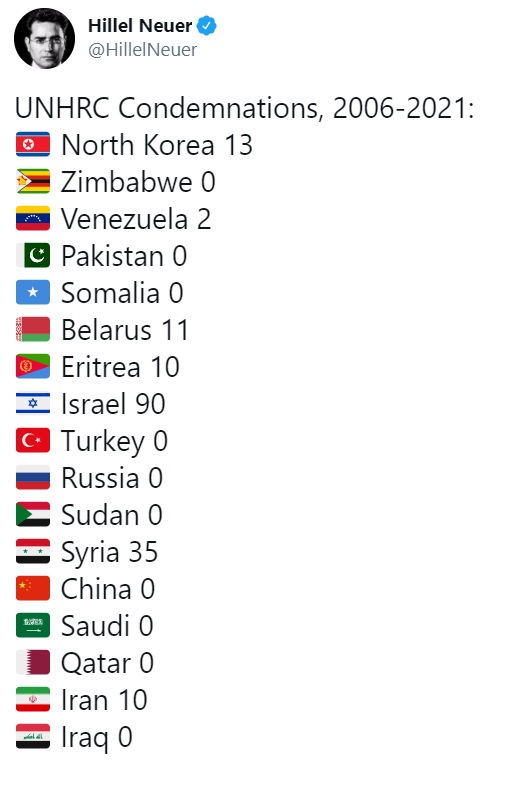 This history here is so overwhelmingly obvious, hypocritical, and antisemitic because not only are the allegations often based on lies, but they are also not consistently applied to the other nations. The Jerusalem Connection will monitor this situation carefully.

And then, last week, The International Criminal Court (ICC) has ruled that it has the jurisdiction to investigate Israel for alleged war crimes. The court’s ruling paves the way for the ICC prosecutors to open a probe against the Israel Defense Forces (IDF) for their defensive military actions against Gaza-based Hamas and other Palestinian terrorist groups.

So this is the bad news. The good news is that as of this week, the Biden administration is on record of rejecting the ruling —in solidarity with Israel.

Israel’s Prime Minister Benjamin Netanyahu rejected the international tribunal’s decision to investigate Israel on trumped up charges of war crimes. “Today the ICC proved once again that it is a political body and not a judicial institution,” Prime Minister Netanyahu said. “The ICC ignores the real war crimes and instead pursues the State of Israel, a state with a strong democracy that sanctifies the rule of law, and is not a member of the ICC.”

What is great news is that the Biden Administration also agrees:

The US’s Biden’s administration rejected the ICC”s jurisdiction claims made by the Hague-based tribunal in its latest ruling. “We have serious concerns about the ICC’s attempts to exercise its jurisdiction over Israeli personnel,” State Department spokesman Ned Price announced last Friday, “The United States has always taken the position that the court’s jurisdiction should be reserved for countries that consent to it, or that are referred by the UN Security Council.” The State Department’s statement, which reflects the long-held U.S. policy, is in line with the view held be many legal experts.

Some other glimmers of good news?

The Biden administration has indicated that it will  “embrace” the IHRA working definition of antisemitism. This is something my team together with a network of Christian leaders (American Christian Leaders for Israel- ACLI) have been discussing, praying for, and lobbying with US officials.

From the Department of State:

As prior US administrations of both political stripes have done, the Biden Administration embraces and champions the working definition . We applaud the growing number of countries and international bodies that apply it. We urge all that haven’t done so to do likewise. – Deputy Assistant Secretary of State for Democracy, Human Rights and Labor Kara McDonald.

It is not clear how that will manifest within the current administration and amongst its various members who oppose it–including members of congress who push back on this adoption since it calls out movements such as BDS and they claim is stifles free speech.

Another bit of good news…

A new Arabic-language video produced by the American Jewish Committee aims to fight antisemitic conspiracy theories in the Arab World, the Jewish nonprofit announced last week. And, it Is being well-received.

The video focuses on propaganda book called “The Protocols of the Elders of Zion,” a 19th-century Russian work that claims to reveal a secret Jewish plot for world domination. While the book is well known to be an antisemitic hoax, it has had an enormous impact and served as a rallying cry for antisemites — including the Nazi Party. This book’s concepts permeated the Arab world quite deeply over the last 100 years as well.

The new video is part of a series produced by AJC that aims to increase understanding of Jews and Jewish history throughout the Arab world.

“There is increasing recognition that scapegoating the Jews and Israel will not solve the region’s problems, and that anti-Semitic conspiracy theories have been a stubbornly big obstacle to regional advancement,” a spokesman said.

Launched in early 2020, the project’s Arabic-language videos have drawn hundreds of thousands of views on YouTube!

This is great news and coincides with the progress we are seeing in the Arab world to recognize Israel and Jews in the region as legitimate neighbors, business partners, and security partners. This was evident in the Abraham Accords and the collaboration we see between the UAE, Bahrain, and other Arab leaders, together with their people, who not only are reaching a hand of peace to Israel, but also being quite outspoken against the PA leadership and the narrative it has been peddling for some 80 or so years.

While American’s and their leadership are getting their heads around some just and true policies and positions regarding Israel and antisemitism, I am thrilled that the Arab world is slowing wiping the sand out of their eyes and its leadership and its people are weary of the warring attitudes. They seem to be trying to make peace and progress (and prosperity) for the future.

Shavua Tov, have a great week.