Pre-Order: The Casualty of Contempt 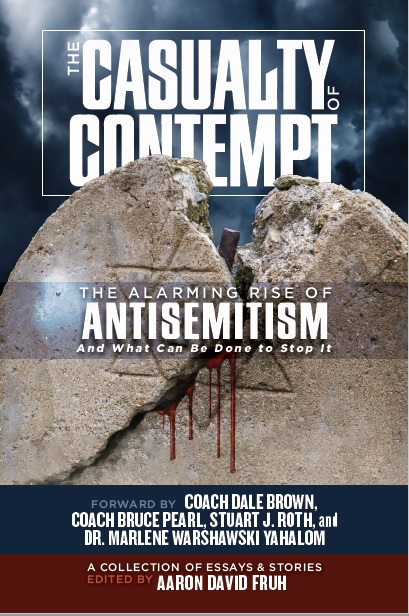 I am delighted to let you all know that next month we will have a newly published book available, The Casualty of Contempt, in which I have authored a chapter called “When Compassion Goes Awry—Young Christian college students and professionals are abandoning their faith to join social justice causes: An Examination.”

We are now taking pre-orders for the suggested donation of twenty dollars.

More about the Book

One of the great characteristics of the human spirit is courage. Courage is the stuff of life that adds meaning and significance to our human existence. Albert Camus, the French writer who joined the resistance against the Nazi’s echoed this sentiment when he said, “If men cannot always make history have a meaning, they can always act so that their own lives have.” By accepting the challenge not to be a bystander in the face of growing antisemitism, you honor the memories of the victims of the Holocaust. Defending Jewish people today is an act of remembrance of the past victims of the horrors of antisemitism.

Israel Team’s new book, The Casualty of Contempt – a book filled with epic and courageous stories and essays by sixteen different authors will inform you of the heart wrenching fact that we are seeing in America the same kinds of anti-Jewish rumblings and violence evident in Europe prior to and during the Holocaust.

Part of Israel Team’s mission is to educate good people with a keen awareness of history so they will be ready to challenge the scourge of antisemitism as it blatantly attempts to become mainstream in our generation.

Listen to these courageous voices from history on the subject of indifference versus courage:

“I know that the great tragedies of history often fascinate men with approaching horror. Paralyzed, they cannot make up their minds to do anything but wait. So they wait, and one day the Gorgon monster devours them. But I should like to convince you that the spell can be broken, that there is an illusion of impotence, that strength of heart, intelligence and courage are enough to stop fate and sometimes reverse it.” -Albert Camus

“When a whole population takes on the status of bystander, the victims are without allies; the criminals, unchecked, are strengthened, and only then do we need to speak of heroes. When a field is filled from end to end with sheep, a stag stands out. When a continent is filled from end to end with the compliant, we learn what heroism is.” -Cynthia Ozick

During the extermination of six million Jewish men, women and children in the Holocaust….”In Hitler’s Germany a particular code was widespread: Those who knew did not talk; those who did not know did not ask questions; those who did ask questions received no answers. In this way the typical German citizen won and defended his ignorance, which seemed to him sufficient justification of his adherence to Nazism. Shutting his mouth, his eyes, and his ears, he built for himself the illusion of not knowing, hence not being an accomplice to the things taking place in front of his very door.” -Holocaust Survivor, Primo Levi

“The opposite of love is not hate, it’s indifference…..We must take sides. Neutrality helps the oppressor, never the victim. Silence encourages the tormentor, never the tormented. Sometimes we must interfere.” -Holocaust Survivor, Elie Wiesel

Yes, it is true! All of our lives are meant to have meaning and purpose. Developing the strength of courage in the face of impending evil, assuredly adds meaning to a person’s very existence.