God’s Beloved Son Jesus, THE LIGHT in a World Looking to the Heavens 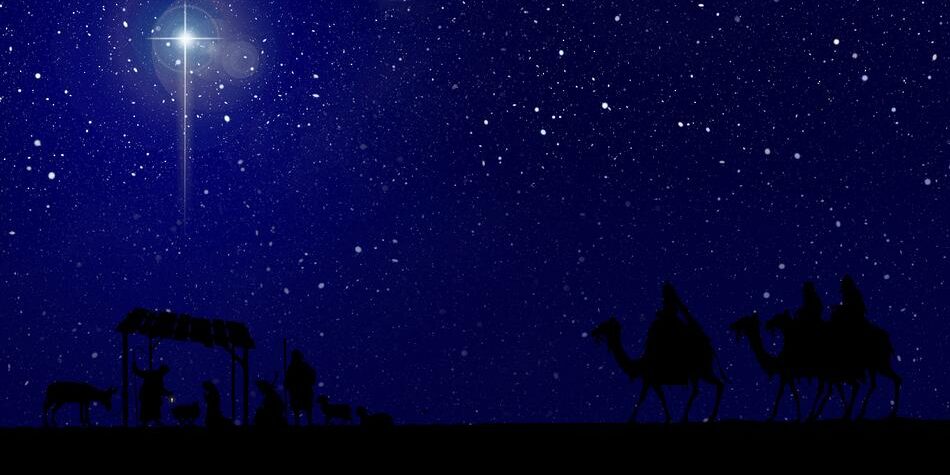 On December 21, 2020, the longest day each year, Saturn and Jupiter converged in the skies in a celestial phenomenon not observed with the naked eye since the year 1226.

My husband Paul and I saw it with and without our binoculars as Saturn and Jupiter presented the earth with their socially distanced hundreds-of-millions-miles apart meeting. Yet, it seemed like one planet to the naked eye.

Our binoculars are not fancy ones but when we looked through the lens, the two planets looked like one round, intricately woven, planetary snowflake. Magnificent!

We stood in the cold early-night air looking up in “awesome wonder,” as the lyrics of the hymn “How Great Thou Art,” are expressed. We lifted a short, worshipful prayer to the Creator of the Universe. Tears surprisingly sprang to my eyes becoming an unexpected emotional moment. I felt awestruck, not only with the skies but with the realization that we stood in the same wonderment of gazers, alive eight hundred years ago.

The year 1226 was the last time this planetary convergence was seen with the naked eye because it too happened as the skies sank into night. The telescope had not been invented. (Galileo discovered these planets around four hundred years later.) Gutenberg’s printing press was not yet invented either, but scribes whom God chose as His vessels, had already penned ancient Jewish scrolls to transcribe His love to the world He created.

The beloved Saint Francis of Assisi lived to see the convergence of Jupiter and Saturn on March 4, 1226, then died October 3, 1226. Mongolian ruler Genghis Kahn was alive in 1226 conquering vast lands. European nations already existed and since the United States of America did not, we are the first Americans to view this awesome celestial event with the naked eye. I find this astonishing!

God’s chosen people, Jews living in the Holy Land, also saw the centuries- earlier convergence too, the Bethlehem Star, while Wise Men from the east journeyed to Israel using their astronomical ability to guide them.

Bible passages, along with Jewish sages’ writings, relate that Jesus’ birth took place in the “Tower of the Flock” (Micah 4:8) in Bethlehem, along the road to Jerusalem six miles away. Shepherds were remarkably familiar with The Tower of the Flock, in Hebrew, Migdal Eder. The floor of Migdal Eder was akin to an animal hospital where Shepherds tended thousands of lambs born, then wrapped in swaddling cloths and placed in mangers. After the eighty-mile journey from Nazareth with her betrothed Joseph, Luke 2:7 records, “and she gave birth to her firstborn, a son. She wrapped him in cloths and placed him in a manger.” (NIV)

Luke 2:8-20 recounts the glorious birth announcement from the angels singing heaven’s melodies to the Shepherds out in the field. In Luke 2:12 they gave them specific directions, “This will be a sign to you: You will find a baby wrapped in cloths and lying in a manger.” After the angels disappeared, the Shepherds didn’t need a GPS. They knew exactly where to run.

Both the shepherds and the lambs were NOT ordinary. The Sadducee religious leaders appointed shepherds who were experts in animal husbandry. They gave them the title Shepherd Priests. The lambs born at Migdal Eder were special too.

When the lambs reached a year old, the shepherds herded thousands of them to Jerusalem on what the ancient Jews called The Day of Lambs to present them to The Temple Saducees. The Migdal Eder lambs were the chosen Passover lambs without spot or blemish; a description of our Savior also sacrificed at Passover for us. Jesus, the Perfect Lamb of God, born in Bethlehem’s Tower of the Flock, entered Jerusalem for the last time, once again with the lambs. In John 1:29, John the Baptist described Jesus perfectly, exclaiming at the Jordan River, “Behold the Lamb of God Who takes away the sin of the world.”

In our modern world we are experiencing another kind of convergence, a convergence of despair and darkness. Yet, the hope, light, and strength that God the Father imparts to us shines the way to shalom in the middle of chaos.

With deep and inadequate thankfulness, I’m also awestruck that God gifted us with an adoption process into His royal family through His Son Jesus, the Perfect Lamb. Christmas may not be as merry this year, but a “Thankful Christmas” can be our 2020 theme because Jesus endures as the Light of the World and our King of Kings!

ENJOY NOW THE INSPIRATION IN A POEM WRITTEN BY MY HUSBAND PAUL.

MY KING LIVES
My King left His throne, born into the human race as a baby,
crawling, gurgling, drooling; the Creator of sound unable to utter a word.

My King grew into an uncrowned royal toddler, learning to walk,
touching everything around Him, experiencing, with human hands,
all that He created.

My King, unrecognized, grew into a Jewish teenager, talking with the Temple Rabbis who marveled at His words, not grasping His royalty or the fact that their Messiah was enlightening for them the very words He wrote.

My King grew into manhood working in the carpenter shop with His earthly Abba making chairs, tables, cabinets. Then suddenly, His Highness put down the tools, kissed His mother good bye and walked to the Jordan where John recognized His Royalty and baptized Him, and Father affirmed His call.

My King, knowing this earth was not His kingdom, served as a Rabbi at thirty, a teacher, a healer, a lover of the unlovable, calling those whom He created
to walk with God the Father in relationship rather than a rulebook.

My King was obedient to His earthly call as completely God and completely man, fulfilling the scripture He wrote, not uttering a word as they shed His Royal blood. And Even as “King of the Jews” was scornfully tacked on His cross, it was not man’s I’ll get even but “Father, forgive them.”

My King died! Soldiers pulled His limp body from the cross. How frail he seemed!
Only three hours, so little time to kill the greatest Man to ever live. Overcome with tears, not understanding, those who loved my King carried Him the tomb.

My King did not remain in the tomb. He conquered death. Three hours to die, three days dead, and then victory! The King of the Jews became the King for all humankind giving us the gift of eternity.

My King now lives high and lifted up at the Father’s side and in the hearts of all of us who believe. My King Lives! Is your King alive?