Knesset to dissolve within 24 hours 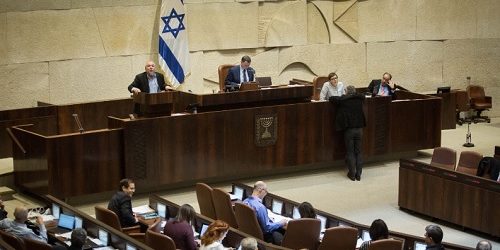 The Knesset on Monday night failed to pass the first reading of the bill that would have postponed the deadline for the approval of the state budget.

49 MKs voted against the bill and 47 voted in favor.

As a result, the Knesset is expected to dissolve in the next 24 hours since the budget has not been approved due to ongoing disagreements between the Likud and Blue and White.

The bill failed to pass after Knesset members from the coalition – Michal Shir from the Likud and Assaf Zamir, Ram Shefa and Miki Haimovich from Blue and White – voted against it.
Shortly after the vote, Shir announced she would be resigning from the Knesset and joining Gideon Sa’ar’s new party.

“I am at peace with my decision to do the least I can to end this embarrassing show of a stuck and conflicted government which is holding an entire country hostage for political seats, and therefore I will resign from the Knesset and join ‘New Hope’ led by Gideon Sa’ar,” she wrote on Twitter.

Just before the vote, Prime Minister Binyamin Netanyahu asked for permission to speak in the plenum and said, “I was delayed because at exactly midnight, I had a conversation with one of the heads of the largest companies in the world who develops vaccines. I asked him to advance the bringing of vaccinations to Israel and at the same time I asked him about the mutation .”

“He said they have developments and research, and their assessment is that the vaccine we have can very effectively treat the mutation. They will know for sure within days and that is of course great news for humanity and for the people of Israel. That is what I did during this time. During the day, I worked with my colleagues to close our skies against the mutation, which may already be here.” Continue Reading….