The Miracle of the Abraham Accords Shining Brightly During Hanukkah 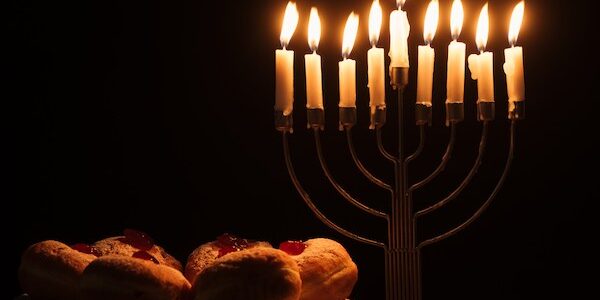 Although the eight days of Hanukkah festivities are ending, seasonal miracles are continuing to spread light across the Middle East. When Israeli children play dreidel games, the Hebrew phrase, “A great miracle happened here” is ever-present. Each dreidel (spinning top) is stamped with Hebrew letters that stand for “A great miracle happened here” (in Hebrew, Nes Gadol Haya Sham). It signifies the outnumbered Maccabees’ stunning victory over King Antiochus IV’s tyranny in 164 B.C., followed by the Festival of Dedication or Lights. The Hebrew name Maccabees, meaning “hammer,” can describe reshaping or forging something new. Unlike the heroic Maccabees’ ancient war against pagan oppression—fought to preserve their people and their religious freedom—today’s eight-day tradition of Hanukkah gift-giving is forging the wide-ranging gift of peace.

Today, the great miracle happening in the Middle East began under the visionary leadership of President Donald Trump. On August 13, 2020, he announced the momentous Abraham Accords, a peace agreement designed to forge normal relations between Israel and Arab nations. The name of the agreement honors Abraham, the recognized patriarch of Judaism, Christianity, and Islam.

On September 15, President Trump hosted a ceremony on the South Lawn of the White House, with leaders from Israel, United Arab Emirates (UAE), and Bahrain signing the first historic accord. Since then, Sudan and Morocco have also committed to the Abraham Accords, with more nations expected to join in. A modern miracle, indeed.

The opening paragraph of the Abraham Accords declaration states, “We, the undersigned, recognize the importance of maintaining and strengthening peace in the Middle East and around the world based on mutual understanding and coexistence, as well as respect for human dignity and freedom, including religious freedom.” Since August, the miracles are manifesting themselves in the key phrases of the declaration already extending into Hanukkah 2020.

One sign of the rapidly growing ties between Israel and UAE is the construction of a 12-foot public menorah at Dubai’s Burj Khalifa, the tallest building in the world. Hanukkah lights have filled the skies each night as celebrants enjoy food and parties. Another positive sign: 28 commercial and 10 cargo flights scheduled weekly between the two nations. These flights are a significant indication that the UAE has abandoned its Boycott, Divestment, and Sanctions (BDS) policies—which amounted to longstanding economic warfare against Israel. By joining the Abraham Accords, Arab nations indicate they are no longer economically boycotting Israel.

In October, UAE officials and Prime Minister Netanyahu held a signing ceremony at Israel’s Ben Gurion airport where Netanyahu announced, “We are exempting our nationals from visas and this will offer a huge boost to business, tourism, and people-to-people contacts. The mutual trade and exchange of goods, services, technology, and knowledge will benefit immeasurably not only our two countries but the Middle East as a whole.”

Both nations have set up direct telephone services. Intelligence and security discussions began quickly between Mossad’s Director Yossi Cohen and Sheikh Tahnoon bin Zayed, the UAE’s National Security Advisor. At a recent Israel-Dubai conference in UAE, Emirates Economy Minister Abdullah ben Tuk Al-Ameri remarked, “I am sure the agreement is a turning point for the entire Middle East.” He added that Israel and UAE will prosper through investments and trade amounting to billions of dollars in the future.

Since Bahrain, another Gulf nation, joined UAE at the momentous September 15 signing ceremony at the White House, Israel and Bahrain are set to open embassies in both nations. In addition, electronic visas began to be issued on December 1 and air travel will take off in 2021.

The Gulf kingdom’s foreign minister, Abdullatif Al-Zayani, described the agreement as “a warm peace that will deliver clear benefits to our peoples.” A Bahraini-Israeli trade council is being set up, along with academic ties between Bahraini and Israeli universities. In early December, Bahrain reached out to Israeli Foreign Minister Gabi Ashkenazi to attend the International Institute for Strategic Studies (IISS) Manama Dialogue. Manama is Bahrain’s capital.

The prestigious IISS describes itself as “an international Research Institute that provides objective information on military geopolitical and geo-economic developments that could lead to conflict.” Israel’s participation is a solid sign of cooperation, since Israel is a global leader in defense and security. Both Israel and the Middle East Arab nations stay acutely alarmed about the Iranian threat.

Despite such momentous achievements, it’s important to note that forging and implementing new agreements among nations is not a perfect process. Sudan’s entry into the Abraham Accords on October 23 posed convoluted issues. The nation of Sudan is trying to rebuild after suffering under former President Omar al-Bashir’s 20-year reign of terror. In April 2019, the Sudanese people finally overthrew him. Yet several dilemmas may cause Sudan to withdraw from the Accords.

First, Bashir’s terrorism drove 6,200 Sudanese refugees to flee to Israel. Complications have arisen over whether Israel will try to repatriate the Sudanese back to their homeland, but the refugees claim parts of their country remain dangerous. Because that nation is economically desperate, an Israeli delegation visited Sudan in November and held lengthy discussions with officials about agriculture and water. Israel and the UAE sent $5 million of wheat as a goodwill gesture.

Also at issue is whether the U.S. Congress will approve delisting Sudan from the State Sponsors of Terrorism (SST) designation. The United States agreed to do so in its negotiations, but if Congress reneges, Sudan has threated to withdraw from the Abraham Accords. The removal of the SST designation would open doors for foreign investments to help the nation stabilize and recover from the appalling reign of their deposed dictator.

Morocco is the latest member of the Middle East miracle. On December 10—the first day of Hanukkah—President Trump announced that Morocco was joining the Abraham Accords, making it the fourth Arab nation to do so since September 2020.

Morocco and its large Jewish community had enjoyed centuries of relative harmony, including decades of interaction with the modern state of Israel. In 1956 Morocco declared its independence from France. Then in 1963, upwards of 100,000 Moroccan Jews began immigrating to Israel while keeping their genial cultural identity with Morocco. In 2000, though, Morocco suspended most of its ties with Israel when the Palestinians’ Second Intifada (uprising) erupted. Morocco sided with the Palestinians. However, the Abraham Accords have opened the channels again and Morocco is redeveloping its ties with the Jewish state.

Last week, during the traditional menorah lighting at Jerusalem’s Western Wall, Prime Minister Netanyahu again thanked President Trump for his outstanding leadership in his Hanukkah announcement about Morocco. Accompanied by U.S. Ambassador to Israel David Freidman, Mr. Netanyahu recalled, “Everybody knows the tremendous friendship shown by the kings of Morocco and the people of Morocco to the Jewish community there. … These Moroccan Jews came to Israel and they form a human bridge between our two countries and our two peoples—of sympathy, of respect, of fondness and love.” Mr. Netanyahu also remarked, “This will be a very warm peace. On this Hanukkah, the light of peace has never shone brighter than today in the Middle East.”

An unnamed Israeli diplomat commented to the Arab Al-Monitor news, “Friends of mine in Morocco told me yesterday they cried in happiness when they heard the news.”

Israel will maintain Gulf State airplanes at Ben Gurion Airport in Tel Aviv.
Dubai and Israel diamond exchanges are setting up offices in each nation.
Cooperation is rapidly increasing in tourism, sports, culture, science, and technology between UAE and Bahrain—the first signers—and Israel.
Israeli agricultural technology will help the Gulf States overcome their water and crop shortages. (UAE currently imports 80 percent of its food.)
For the first time in an Arab nation, Bahrain’s schools will teach Jewish history and culture.
Last week, President and Mrs. Trump hosted their annual Hanukkah party in the East Room at the White House. Among his comments, President Trump spoke of “the miracle that kept the flames of the menorah burning in the Second Temple for eight nights.” He further observed, “The candle-lighting tradition … is rooted in perseverance and faith—two virtues that are indicative of the Jewish culture and the Jewish faith.”

Well said, Mr. President. Happy Hanukkah to you and your administration for giving Israel and the Middle East the gifts of peace and hope that are reshaping the lives of millions. Hanukkah might transition into a years-long Middle East festival where great miracles will continue to happen there!

Join CBN Israel in the waning days of Hanukkah 2020 recalling Genesis 18:18 (NIV): “Abraham will surely become a great and powerful nation, and all nations on earth will be blessed through him.”

Pray with thankfulness that we live at a time in world history to witness the Abraham Accords.
Pray that God would bless President Trump and his administration for working toward unprecedented peace through the Abraham Accords.
Pray that God would give Prime Minister Netanyahu and the Israeli government wisdom as they continue to strive for peace in the region.
Pray for the citizens of Sudan who have suffered terrible traumas. Pray for God’s mercy upon them and that the Abraham Accords will go forward on their behalf.
Pray for additional Arab nations to join the Abraham Accords to forge deeper ties across the Middle East.
Let’s reflect together on the words of Psalm 22:27 (NASB): “All the ends of the earth will remember and turn to the Lord, and all the families of the nations will worship before You.”

Category: Feasts and festivalsBy The Jerusalem ConnectionDecember 17, 2020Leave a comment