The Menorah—Israel’s National Symbol is a Hanukkah Inspiration 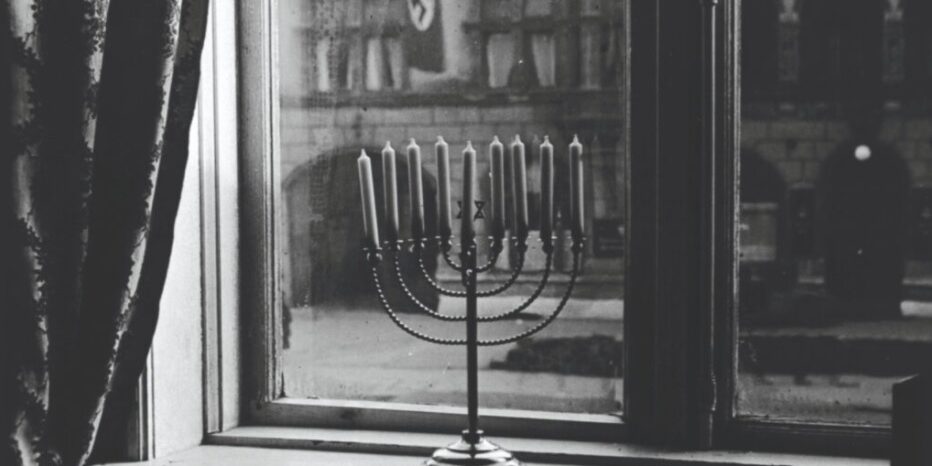 The imposing 15-foot-high bronze menorah that stands like a sentinel outside Israel’s Knesset Building has long been a tourist favorite. A photo op in front of this extraordinary candelabrum offers a lasting memory for groups or lone visitors who pose before Israel’s official national symbol. The magnificent seven-branch Knesset Menorah reminds us of the survival of the Jewish people, the Jewish faith, and the return to their ancient homeland.

In Exodus 25:31-40, God gave the instructions and detailed design to Moses at Mount Sinai for the seven-branch “lampstand” that made up the exquisite menorah. The most skilled craftsman was chosen to make it, hammering it out of a single piece of gold. It weighed perhaps a hundred pounds. These golden lampstands graced The Tabernacle in Shiloh and the First and Second Temples, providing continuous light in the Holy Place. Only the High Priest tended the wick and replenished the pure olive oil. The light served as a constant reminder to the ancient Jews that God was with them every moment in their wilderness sojourn. Over time, opinions have differed about the seven menorah branches, but some think it symbolizes the seven days of creation. It is the oldest continuously used religious symbol in Western civilization.

Over the centuries, the menorah developed into a nine-branched candelabrum called, in Hebrew, a Hanukkiah or a “Hanukkah menorah.” Lexicographer Ben Yehuda (1858-1922) is credited with reviving the Hebrew language but his wife Hemda, herself an author, created the word, Hanukkiah. The eight candles were said to refer to the number of days the oil burned in the Temple after the Maccabees recaptured it in 168 B.C. The ninth candle in the center, set just a little higher, is called the “shamash,” or helper/servant candle, which is used to light the others.

Thus, the Menorah and the Hanukkiah are emblematic cousins existing in two different eras, both symbols of religious liberty, restoration, light, and victory.

In 1948, Prime Minister David Ben Gurion rechristened the ancient symbol as Israel’s official emblem, its coat of arms. On either side of the coat of arms menorah, olive branches stand for Israel’s longing for peace. In 1956 the British Parliament donated to Israel the famous Knesset Menorah mentioned earlier. It was fashioned by Benno Elkan, who had escaped Nazi Germany in 1933 and settled in England, where he became a gifted sculptor. Elkan included intricate bronze reliefs and engravings on his menorah, which some have called a “visual textbook of Jewish history.”

That Jewish history includes the desecration of the Second Temple in 167 B.C. by Antiochus IV Epiphanes (“god manifested”) and his army. The Syrian empire’s tyrant proclaimed himself a deity, demanding that the Jews abandon God and their faith. Realizing that their religious liberty was at stake, the outnumbered but valiant Jewish Maccabees rose up as an elite fighting force to stop the despot’s genocidal goal of destroying God’s chosen people and their faith.

The Maccabees fought for three years, at the end of which they recaptured the Temple and cleansed it of Antiochus’ paganism. The story about finding only a day’s supply of oil—which burned for eight days while more oil was purified—is not mentioned in the Bible. Whether that story is a legend or not, the Festival of Dedication (“Hanukkah”) was born. It is celebrated for eight days, supposedly because the sacred oil miraculously burned for that length of time. While the light’s symbolism is important, another reality runs deeper and is sometimes obscured: the Maccabees’ victory over Antiochus guaranteed the survival of the Jews and Judaism, as well as the birth of the future Messiah, Jesus, who was born in Bethlehem just a few miles from Jerusalem. In John 10:22–23, the only verse in the Bible that mentions the event, Jesus is described as celebrating the Festival of Lights, also called Feast of Dedication. At that time, Jesus declared His deity, saying, “I and the Father are one.”

It’s important to note that the Feast of Dedication goes beyond candles and oil. This was a landmark victory where God enabled a remnant of dedicated fighters to preserve His people. The ancient Maccabean triumph has endured as a symbol of eternity, survival, and sacrifice to keep religious freedom. For Christians, the fact that our Lord celebrated the festival verifies the significance of restoration, dedication, and overcoming against all odds. The Festival of Dedication is a way to remember “Persumei Nisa,” Aramaic for “publicizing the miracle.” The miracle was the Maccabean victory.

Let’s fast forward from the Maccabees and the Second Temple frequented by Jesus to the last 90 years of history, which are filled with stories about Hanukkah menorahs and celebrations. One of the most treasured stories began in 1931 when Rabbi Akiva Posner and his family lived in Kiel, Germany. On the last night of Hanukkah on December 11, 1931, Posner’s wife, Rachel, snapped a picture of their lit hanukkiah sitting on the ledge of their window. The picture also captured a Nazi flag in the background across the street at a Nazi headquarters building. After she received the developed picture, Mrs. Posner wrote this caption in German on the back of her photo:

Chanukah 5692 (1932) “Death to Judah,” so the flag says. “Judah will live forever,” so the light answers.” Her simple yet profound words still capture the meaning of the Festival of Dedication today. In 1934, the Posner family mercifully fled Germany, escaping to British Mandate Palestine and settling in beautiful Haifa overlooking the Mediterranean Sea.

Wonderfully, that wasn’t the end of the story. In 2005 one of the Posners’ grandsons, Yehuda Mansbach, donated the family hanukkiah to Yad Vashem, Israel’s World Holocaust Remembrance Center. He made one request to Yad Vashem, which agreed that the Mansbach family could annually take it to their home in Beit Shemesh, Israel, and light it for Hanukkah following the tradition of his parents and grandparents. Yehuda recalled, “The menorah and the photo were part of the family’s history, but nobody ever made a big deal about it.”

Four years later, the Posners’ great-grandson, Akiva Mansbach, took the hanukkiah menorah to his Israeli Defense Forces (IDF) army base so he and his unit could use it to celebrate. Dressed in his IDF uniform, he saluted the family hanukkiah menorah. Akiva remarked, “The same light that my great-grandparents lit in the exile in Germany is the light that so many light today in Israel. It demonstrates the continuity of Jewish history.”

Yad Vashem has now amassed archives of multi-topic testimonials from Holocaust survivors. Among the topics shared are ways that the Jewish communities tried to maintain their identity and their Hanukkah traditions. In Nazi-occupied countries, the Nazis forced the Jews into a thousand walled-in ghettos in cities like Minsk, Riga, and Warsaw, where many died in the appalling conditions.

Despite the inhumane suffering, the Jews found ways to celebrate Hanukkah not only as an expression of their faith but to keep their sense of community seeking light in the darkness. Those who survived the ghettos found themselves transported to the concentration camps where the horrors increased. Yet even in the depths of the Nazi darkness of the camps, Jews invented ways to observe Hanukkah. A Jewish-Hungarian survivor imprisoned at a German labor camp describes taking threads from a blanket to make Hanukkah “candles.” One family made a menorah from foraged wood, aluminum, and battery parts. They used grease and cotton wicks for candles. Another testimonial described an inmate’s shoe, a wooden clog, which they turned into a hanukkiah, using strings from a concentration camp uniform for a wick and black shoe polish for the “oil.” The Holocaust survivors’ stories are a legacy for both the Jewish and Christian communities—a legacy of devotion to faith, religious liberty, and the will to live.

Depictions of menorahs have been found all over Israel—in mosaics, on ancient coins, and engraved into Jerusalem stone. I’ve had the privilege of seeing one of the most beautiful Jerusalem stones; it was discovered in 2009 when a first-century synagogue was uncovered in Magdala on the Sea of Galilee near Tiberius. Archeologists identified it as a Torah reading table with a seven-branched menorah beautifully chiseled into it.

Since Nazis confiscated most of the menorahs to melt them down for silver, few pre-World War II menorahs still exist. When European menorahs from the 18th and 19th centuries are discovered and sometimes sold at auction, they can fetch up to $100,000 apiece.

Modern day menorahs are also scattered all over the globe in public places. In fact, the world’s tallest menorah rivals Israel’s majestic Knesset Menorah. The 32-foot-high structure is located in Manhattan near Central Park. At annual Hanukkah celebrations, cherry pickers help with the lighting of real oil lamps on the 4,000-pound steel structure. Our National Menorah in Washington, D.C., has been erected and lighted annually since 1979. It stands 30 feet high and is located near The White House on the Ellipse.

In ancient times, the Jews were God’s vessels for our Scripture and our Savior. Jesus’ earthly homeland, with its innovations and acts of mercy for nations in need, still carries out God’s purpose for Israel as described in Isaiah 49:6—“I will also make you a light for the Gentiles, that my salvation may reach to the ends of the earth.”

May the Menorah of the Holy Spirit light our hearts and minds as we share Jesus’ light with others and remain dedicated to our Judeo-Christian faith.

Join CBN Israel in praying for the Jewish community as they celebrate Hanukkah:

Pray for Israelis celebrating Hanukkah (December 10-18) during the COVID-19. pandemic.
Pray especially for those who are alone in Israel at a time when Hanukkah is usually a joyous occasion.
Pray with thankfulness that God has preserved remnants of His chosen people to ensure religious liberty.
Pray for the peace of Jerusalem and its modern-day Maccabees who guarantee Israel’s security and freedom.
And may we reflect on Jesus’ revelation in John 10:22-23: “Then came the Festival of Dedication at Jerusalem. It was winter, and Jesus was in the temple courts walking in Solomon’s Colonnade.” There, He revealed His own deity, declaring, “I and the Father are one” (John 10:30).

Arlene Bridges Samuels pioneered Christian outreach for the American Israel Public Affairs Committee (AIPAC). After she served nine years on AIPAC’s staff, International Christian Embassy Jerusalem USA engaged her as Outreach Director part-time for their project, American Christian Leaders for Israel. Arlene is now an author at The Blogs-Times of Israel and has frequently traveled to Israel. By invitation, she has attended Israel’s Government Press Office Christian Media Summit three times. She hosts her devotionals, The Eclectic Evangelical, on her website at ArleneBridgesSamuels.com.