The Real Netanyahu (and Trump) Dilemma 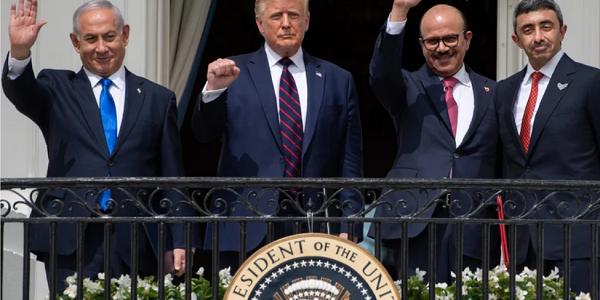 The Nobel Peace Prize Committee’s decision to award the prize to the World Food Program this year assuaged the fears of elitists from New York to Paris and Berlin. The Abraham Accords, which include bilateral peace treaties between the United Arab Emirates, Bahrain, and most recently Sudan, and Israel have fundamentally changed the Middle East. They have upended fifty years of failed peace processing on the part of Western foreign policy elites who seem to fall into deeper and deeper funks with word of each new peace deal.

Newsweek’s cover story on Oct. 2 nicely encapsulated the distress. The cover featured a leering black and white photo of Prime Minister Benjamin Netanyahu and a red and white headline, The Netanyahu Dilemma: Can The Nobel Prize Say No to Bibi?

By giving the prize to the World Health Organization, the committee kicked the can down the road. Maybe President Donald Trump will be defeated next week. Maybe Netanyahu will be ousted from power. And then things can return to normal, they console themselves. They will be able to forget all about the unpleasantness.

What is it about the Abraham Accords that makes the foreign policy “experts” so upset?

Three aspects of the deals really get their goat. The first is their authors. For the likes of the British Foreign Office and the Council on Foreign Relations, few are held in greater contempt than Netanyahu and Trump. The Newsweek article, which dealt with Netanyahu specifically, called him “widely loathed.” And of course, there hasn’t been a US President as despised by “the smart set” as Trump since Andrew Jackson.

The absence of normalization reduced the deals from actual peace to little more than long-term ceasefires. The same hostility and anti-Semitism that fueled the Arab wars against Israel which Egypt and Jordan led, remained and even grew within their societies in the years and decades after they signed the peace agreements.

As Newsweek put it, with barely disguised fury, “The agreements that Netanyahu has wrangled with Arab states of the Persian Gulf fail to resolve, or even address the situation of the Palestinians – a cause with passionate supporters in Europe, on US college campuses and with many US liberals.” Continue Reading….