Dave Rubin: Why I’m no longer an atheist 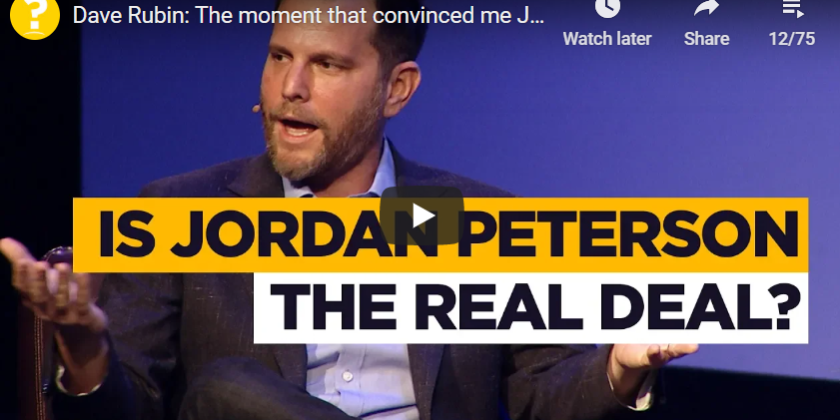 Dave Rubin is one of the bright lights of the intellectual dark web. He occupies that unique niche inhabited by the likes of Jordan Peterson and Douglas Murray, where the sacred and secular rub shoulders. Tired of living in a contentious world of non-overlapping magisteria, these men seek a parley. They aren’t puppets of a particular ideology but a curious audience who just wants to know who is really pulling the strings.

Rubin was featured in a brilliant conversation with Christian apologist John Lennox at the 2019 Unbelievable? conference in Costa Mesa, California. I was lucky enough to be in the audience during the discussion and found it to be a refreshing evening of deep respectful conversation. One of the things that struck me that evening was the admiration that Rubin had for the largely Christian assembly as well as the affection the audience felt for him.

Baptized in the Jordan

Rubin, while raised in a conservative Jewish home, considered himself a cultural Jew content to adopt the atheist label. However, things began to change during one of his yearly self-imposed technology sabbaticals when he began to realize that he was no longer an atheist.

I do this off the grid August thing where I literally lock my phone in the safe and I don’t look at any news or television; I’m completely offline and I really disappear and I try to let my brain reset. And two years ago when I did it, one of the thoughts that I kept having sort of in my peace was that: I’m not an atheist. And I came back and I said it in a very casual way, and I just did this live stream where I just sort of said it very flippantly, that I just don’t like the word atheist – it doesn’t fit what I believe. I do believe in something else, even if I can’t completely articulate what it is. I think Jordan (Peterson) has gone a long way toward articulating the type of thing that I believe in.

Rubin’s digital fast became a transcendent feast and his spiritual intimations were confirmed after being immersed in the thoughts and ideas of Jordan Peterson. Baptized in the Jordan he emerged a new man.

Jordan and I did about 110 stops in one calendar year and about 20 countries – it was pretty amazing – and when you spend that kind of time listening to a true innovative thinker – I mean, truly the guy that I think is the world’s most important public philosopher, let’s say – talking about his biblical lectures and talking about his perspective on life, and that there has to be a bedrock of something that is real and true, outside of us. And then how he relates that through the biblical stories – it moved me; it moved me over the course of the year that we did this together. So, I would say I’m secular basically in my life, but I definitely in the last year have found that there has to be something outside of us; the rest of this makes no sense.

Rubin already knows that a political or cultural agenda without a foundation is not only unworkable but dangerous. He recognizes that this bedrock must be outside of us because only then can we hope to find universal truth. He acknowledges that the biggest threat to foundational unity is the wrecking ball of postmodernity.

The postmodern project calls each of us to create our own purpose, live by our own rules, and do what makes us happy. It insists that we become the master of our fates, the captain of our souls. In other words, it tells us we must sail alone. The problem is that sooner or later we have to put aside our swashbuckling ways and swab the poop deck, but sadly find the task a bit daunting without a crew to help us. Continue Reading…..