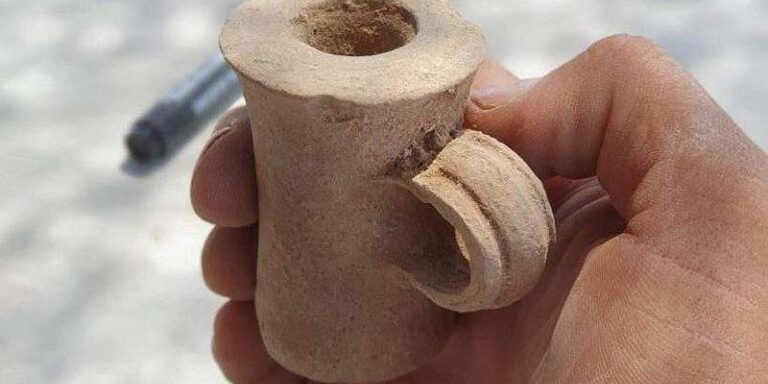 A rare intact inkwell was found in a large Second Temple period building. It is a clay cylinder with a round handle. The discovery of this inkwell supports the hypothesis that writing, and therefore literacy, was practiced by more than the administrators among the ancient Israelites.

As Alan Millard explains in his 1987 article, “The Question of Israelite Literacy” (Bible Review, Fall 1987), the formal inscriptions aren’t always the most important surviving artifacts. The strongest evidence of widespread literacy among the ancient Israelites is essentially doodles: “graffiti consisting of names and notes written in ink or scratched on pots and pans or scribbled in tombs.” These “occasional inscriptions”– scribbled letters on a step, a name on a mug, an incoherent complaint–suggest writing was widely enough practiced to be spontaneous:. The penmanship is not as polished as the formal inscriptions that survive, also a sign that it may have come from amateurs rather than those few men for whom recording was their livelihood.

The excavation was conducted by the Archaeology Unit in the Civil Administration with Herzog College. Dr. Dvir Raviv, Haim Shkulnik and Dr. Yitzhak Maitlis co-led the archaeological excavations at Khirbet Brakhot. Gush Etzion, where Khirbet Brakhot is located, is about ten miles south of Jerusalem. Continue Reading….