The Stones Cry Out 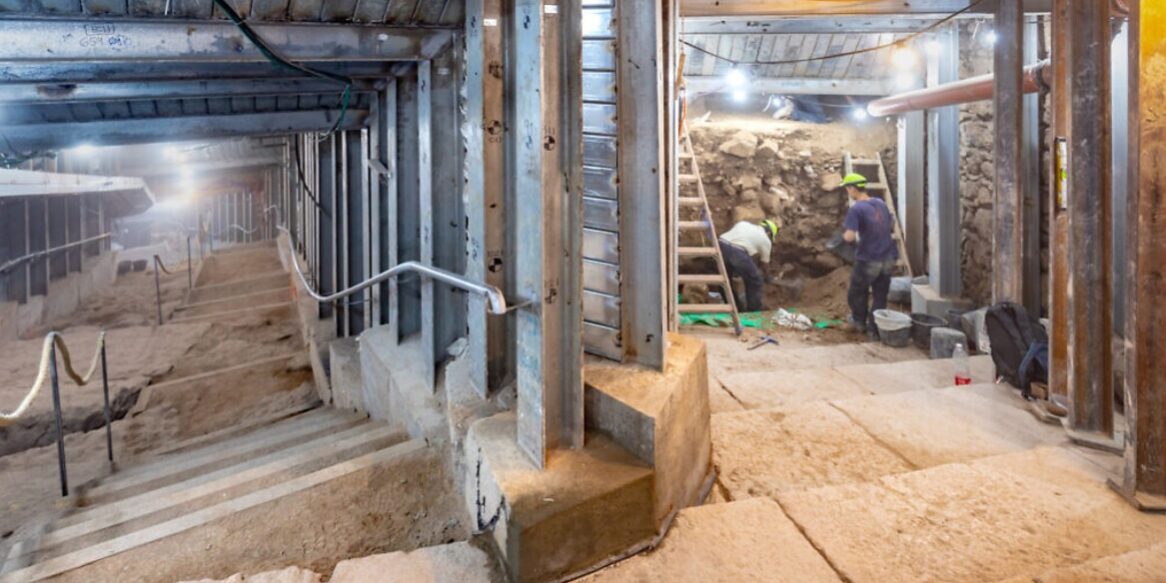 By Chris Knight, Standing With Zion—

One of my favorite sites to visit while in Israel is the ruins of King David, just southwest of the old city. Many times, I have gazed upon the stones of the ancient City of David at the bottom southern slope of Mount Moriah. Imagine king David walking along the limestone with his son Solomon skipping by his side asking his dad life questions. It is an emersion into history to tread these ruins with the many great people that have come before.

Every trip to Israel we take time to go to the old city of Jerusalem and visit the Western Wall to pray. Along the way we pass by the ruins of David. Each trip, more and more of the ruins rise from their hiding place as the archaeologist gently expose the ancient city from its years of isolation. One day as I was walking by, I remembered God’s words through his prophet Amos about the ruins. My heart leapt as the hair of my arms stood on end. I must admit I got a little misty eyed as I was seeing prophecy fulfilled. To this day, whenever I travel to Israel and see the ruins, the stones cry out.

When I ponder the ruins of king David, I cannot help but think of Luke 19 where Yeshua confronts the Pharisees, after the Pharisees said to Him to rebuke his disciples because they were rejoicing and praising God with a loud voice for all the mighty works that they had seen Him perform, and Yeshua said to them “I tell you that, if these should hold their peace, the stones would immediately cry out.” The stones at the ruins of David today are crying out. Even though the stones themselves have no voice, the prophetic words of the prophet spoken about those stones are sending forth an end-time message.

Deeper into Luke 19 Yeshua, after He said that even the stones would cry out, made a disturbing prophecy as he came closer to the city of Jerusalem and wept, He said, “if you only knew today what is needed for peace! But for now, it is hidden from your sight. For the days are coming upon you when your enemies will set up a barricade around you, encircle you, hem you in on every side, and tear you to the ground, you and your children within your walls, leaving not one stone standing on another–and all because you missed the time of your visitation”.

This same story is told in Matthew 23. Matthew gives his account and reveals more details when he wrote what Yeshua said, “O Jerusalem, Jerusalem, thou that kills the prophets, and stones them which are sent unto thee, how often would I have gathered thy children together, even as a hen gather her chickens under her wings, and you would not! Behold, your house is left unto you desolate. For I say unto you, you shall not see me henceforth, till you shall say, blessed is He that comes in the name of the Lord.”

Yeshua’s heart ached as it sank in his chest, and he gazed upon Jerusalem. He knew what was coming on her and her people. He knew Israel’s rejection would cause him to not fulfill his mission to bring in peace and gather Israel, and it would not establish the kingdom of God on earth as in heaven. Because of their rejection, He will have to return a second time thus his words “you shall not see me henceforth”. The Temple will lay desolate and destroyed as a sign when He said, “behold, your house is left unto you desolate” and until they say, “Blessed is He that comes in the name of the Lord”.

Yeshua, in Matthew 23 when He said “blessed is He that comes in the name of the Lord” is quoting Psalms 118:26, this is the same Psalm where we also get “The stone which the builders refused is become the headstone of the corner”, then it says “This is the LORDS’s doing; it is marvelous in our eyes”. Yeshua was quoting this Psalm to make the connection that He is the stone the builders rejected. Matthew 21:42, Acts 4:11, and 1 Peter 2:7 all say that Yeshua is the stone that was rejected and has become the cornerstone and not just a cornerstone, but the Chief Corner Stone.

Yeshua’s sorrow, and the sign – the desolation and destruction of the Temple occurred when Titus’ army, in 70AD, devastated Jerusalem and the Temple and fulfilled His words. They fulfilled the sign. It marked the end of one age and the beginning of another: “The Age of the Gentiles”.

Israel longs, to this day, for the rebuilding of the Temple. Every day the Temple does not stand is a sign of their rejection of Messiah first coming and that we are still in the age of the gentiles. When the Temple no longer lays desolate and restored, this age will have come to its end. The desolation of the Temple and the restoration of the Temple are like book ends marking the beginning and ending of this current age until the fullness of the Gentiles is complete.

What message do king David’s ruins speak, and what do they have to do with Yeshua’s rejection, and The Age of the Gentiles? James answers this question as he quotes the prophet Amos. James, Paul, Barnabas, and others have gathered in Acts 15 to discuss what to do with the Gentiles that are coming into the faith. Just as the disciples and a great multitude had been praising the mighty works performed by Yeshua among the Jews in Luke 19, Paul and Barnabas were declaring what miracles and wonders God had wrought among the Gentiles. James is part of this council that has gathered to seek wisdom on how to graft in the Gentiles that are coming into the faith, seeing how God has chosen to show them mercy and give them the Holy Spirit just as He had been doing to the lost sheep of the House of Isreal.

James shares with the group how Simon Peter stood up and said, starting in verse 7 of Acts 15, “Brothers, you know that in the early days God made a choice among you, that by my mouth the Gentiles should hear the word of the gospel and believe. And God, who knows the heart, bore witness to them, by giving them the Holy Spirit just as He did to us, and He made no distinction between us and them, having cleansed their hearts by faith.”

James then quotes the prophet Amos, from Amos 9, when he said “Men and brethren, hearken unto me: Simon hath declared how God at the first did visit the Gentiles, to take out of them a people for his name. And to this agree the words of the prophets; as it is written, After this I will return, and will build again the tabernacle of David, which is fallen down; and I will build again the ruins thereof, and I will set it up: That the remnant of men might seek after the Lord, and all the Gentiles, upon whom my name is called, saith the Lord, who doeth all these things.”

Because the lost sheep of Israel and the House of Judah missed the messiah the first time, Paul quotes King David in Romans 11, when he said, “Let their eyes be darkened, that they may not see, and bow down their back always”, but he goes on to give hope by saying “I say then, have they stumbled that they should fall? God forbid but rather through their fall salvation is come unto the Gentiles, for to provoke them, the Jews, to jealousy.”

If it were not for this rejection of the Messiah, salvation would not have come to Gentiles, people like you and me. This is the mystery of Christ that was hidden from the foundation of the world, that salvation would go not only to Judah and the lost sheep of Israel but also to the Gentiles. Even though Judah rejected Messiah’s first coming it was no surprise to God because He knew this would happen. God had a greater plan of salvation.

Amos 9, where James quotes from the prophet, he said “Behold, the eyes of the Lord God are upon the sinful kingdom, and I will destroy it from off the face of the earth; saving that I will not utterly destroy the house of Jacob, saith the Lord . For, lo, I will command, and I will sift the house of Israel among all nations, like as corn is sifted in a sieve, yet shall not the least grain fall upon the earth. All the sinners of my people shall die by the sword, which say, the evil shall not overtake nor prevent us. In that day will I raise up the tabernacle of David that is fallen, and close up the breaches thereof; and I will raise up his ruins, and I will build it as in the days of old: That they may possess the remnant of Edom, and of all the gentiles, which are called by my name, saith the Lord that doeth this.”

Romans 11:25 Warns us that we are not to be ignorant of this mystery so that we do not become conceited and puffed up, “that blindness in part is happened to Israel, until the fulness , the gentiles comes in. And so, all Israel will be saved.” Israel’s blindness is coming to an end and the number of the gentiles called by God’s name has almost reached its fullness, and this work will end. Yeshua will then return and finish His mission to gather Israel, bring peace, and the kingdom of God to earth as in heaven and the 1000-year reign of rest. The great Shabbat!

The stones of King David’s ruins are crying out to all who pass by. The excavation of the ruins is prophecy being fulfilled before the world’s eyes. And the words of Abba, through His prophet Amos thousands of years ago, come alive to all those who have, or will have, the honor to cast their eyes upon its stones. The stones are crying out to all that the end of the age is at hand and the full number of the Gentiles, those called by God’s name, is almost complete. The Messiah is at the door… ready… to finish what he started 2000 years ago. To gather all of Israel, establish God’s kingdom, and bring peace. May Yeshua come quickly!

Find out more about Standing With Zion