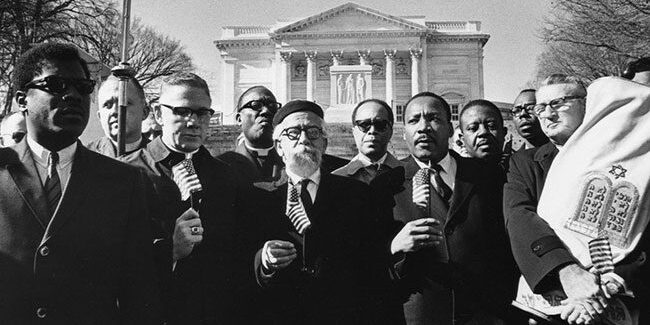 In the 1960s there were two very different black social justice movements. Martin Luther King Jr. was the face of civil rights. A movement centered around peaceful demonstrations, speeches, and small gestures of civil disobedience, with the goal that, “one day… little black boys and black girls will be able to join hands with little white boys and white girls as sisters and brothers.” Malcolm X was the face of black pride and heritage: a very important thing that wasn’t to be lost in Martin Luther King’s perfect, harmonious community. This movement gave blacks a sense of identity and pride that they hadn’t had since the Harlem Renaissance.

Martin Luther King was very appreciative to Jews and Whites who were eager to join the fight. During the freedom rides of 1961 which were split-even between Blacks and Whites, Jews made up half of the White protesters which is very disproportionate to the 2% they amount to in the American population. Jews felt that they had a responsibility to stand up for Blacks as described by a prominent American Jewish newspaper (National Jewish Monthly), “Jews should be foremost in the practice of justice in dealing with the Negro and always vocal in protest whenever the Negro’s rights are Abridged.” Blacks in America seemed to think they had the same responsibility to the Jews. After Jewish persecution was revived in Soviet Russia a conference for Jewish Solidarity was held and Martin Luther King was among the several Black participants saying, “I cannot stand idly by even though I live in the United States and even though I happen to be an American Negro, and fail to be concerned about what happens to my brothers and sisters that happen to be Jews in Soviet Russia. For what happens to them, happens to me—and to you, and we must be concerned.” Martin Luther King loved the Jewish people, saying Judaism was “integral” to his Christian faith.

The movement created by Malcolm X that centered around Black power, pride, and heritage, built a broken people up, but since it was focused more internally in the Black community, Jewish and White help was dispelled. Malcolm X’s movement was more unforgiving to Whites (Jews included). Black power generalized Whites with all the racism and brutalities Blacks were suffering. Because of the self centeredness of this movement, Malcolm X, the Black Panther Party, and other Black power groups became symbols of hate and many times, anti-semitism. There is, in some sense, a sweet spot between Martin Luther King and Malcolm X ideals. Farther down the spectrum is where hate grows like weeds. This is why Black power movements are connected to anti-semitism. Not because it was in their core beliefs, but as Martin Luther King’s counterpart, farther down the spectrum it was harder to balance pride and hate. When hate infiltrated the movement, Jewish and Black relations were spoiled albeit perhaps unintentionally.

Now, without complimentary movements, Black Lives Matter is trying to be both Martin Luther King and Malcolm X, but are struggling at walking the very thin line between these two very different movements and one of the byproducts is anti semitism. That is why, despite the leadership that may fight for the equality of all races, Jews and Blacks alike: on July 1st a Black Lives Matter demonstration gathered and chanted “Isreal we know you, you murder children too” in the streets of DC.