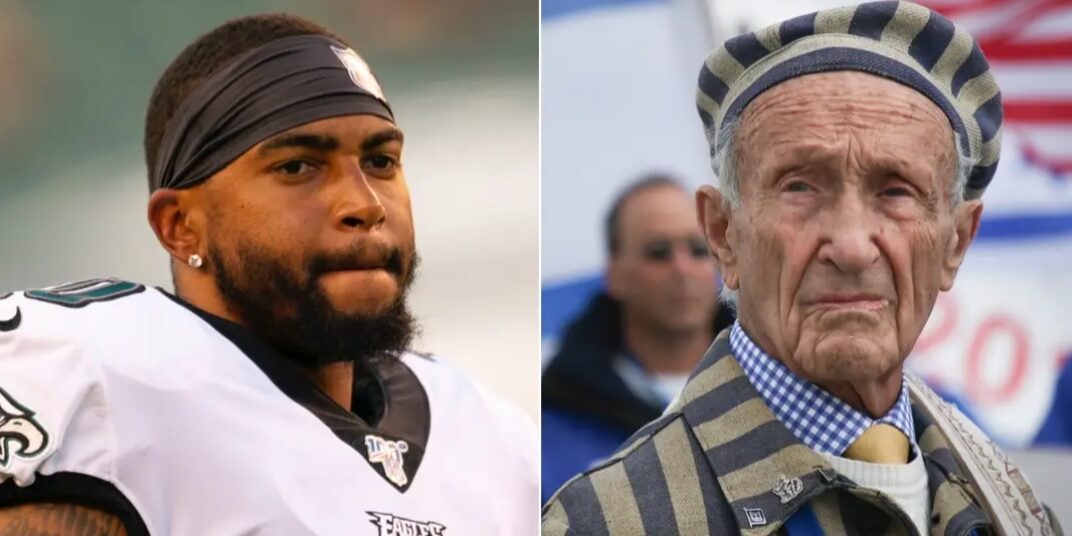 Over the July Fourth holiday, which came in the middle of the current outcry from the African American community, Philadelphia Eagle’s star wide receiver, DeSean Jackson, posted an anti-Semitic quote falsely attributed to Hitler. In it, he claimed that Jews are “blackmailing America” to keep secret that “the Negroes are the real Children of Israel” and that “their plan for world domination won’t work if the Negroes knew who they were.” This quote has the common, baseless, but somehow prevalent anti-Semitic themes of the Jewish people secretly controlling the world.

Jackson had apparently spent many hours listening to Louis Farrakhan, the Nation of Islam leader and an angry, radical, anti-Semitic, Islamic supremacist. He has been quoted calling Hitler “a very great man” and Islamic terrorists “freedom fighters.” In 1991 Farrakhan’s organization published The Secret Relationship between Jews and Blacks a book that overstates Jewish involvement in the slave trade. It has since been proved that Jewish involvement was minimal and many historians have denounced the book as an exaggeration and propaganda. Henry Louis Gates, Jr., head of Afro-American studies at Harvard, called the book “the Bible of new anti-Semitism.” No doubt, Jackson’s posts were inspired by Farrakhan’s very strong and degrading views towards Jews.

Through his effort to fight racism against African Americans, DeSean Jackson expressed deep racism towards another religion, defeating the stated purpose of equality. The spirit of this current movement is to unite and bring together. However, those who have burned Bibles and denigrated Jewish people demonstrate evidence of a movement misled by hate.

Since his posts, Jackson has realized his mistake, reiterating his intention for equality and his failure to fulfill that intention. “My intention was to uplift, unite and encourage our culture with positivity and light.” He later stated. “Unfortunately, that did not happen. I unintentionally hurt the Jewish community in the process and for that I am sorry! Now more than ever we must work together to end discrimination of all types and against all people and communities.”

There was an immediate backlash to Jackson’s Tweets from the NFL, the Eagles, and other NFL superstars such as Patriot’s star wide receiver Julian Edelman. He posted a video in response to Jackson’s posts, reminding Jackson that the plight of the Jewish and African American communities have a lot in common. Edelman invited Jackson to visit the Holocaust Memorial and the African American History and Culture museums with him in D.C. An offer that Jackson accepted. Jackson even met with 94 year-old Holocaust survivor, Edward Mosberg, in an attempt to “educate” and “bridge the gaps between different cultures.”

The African American and Jewish American communities have both suffered discrimination. In the recent past, this shared experience led to solidarity between the two groups. During the Civil Rights movement, Jewish legal professionals fought for legislation to protect African American rights. Rabbis such as Abraham Heschel even marched with Martin Luther King, Jr. The modern era needs more of this solidarity, not less.