Gush Katif – Lessons of the Gaza withdrawal 15 years on 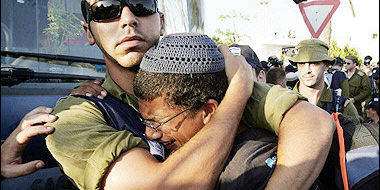 Fifteen years ago today on the Hebrew calendar, on the 10th day of Av, Israel committed one of the gravest self-inflicted catastrophes since the founding of the state in 1948.

Hiding behind the harmless-sounding euphemism of “disengagement,” the government of prime minister Ariel Sharon revved up the bulldozers and utterly destroyed 21 thriving Jewish communities in Gaza while forcibly expelling over 8,000 Jews from their homes, their livelihoods and their land.

Synagogues and yeshivot were left behind, only to be desecrated and set aflame by Palestinian rioters celebrating Israel’s retreat. And decades of pioneering and devotion to rebuilding Jewish life in Gaza were brought to a sudden and screeching halt.

The events of those painful and traumatic days may seem like a distant memory, with little relevance to our current lives. But nothing could be further from the truth. We owe it to ourselves and to the thousands of Jews who were banished to distill the lessons of that disaster and ensure that it never again recurs.

There are many such lessons, but I would like to highlight just three which I believe are especially pertinent.

The first has to do so with the need to promote greater historical memory. Prior to the expulsion in 2005 as well as in the years since, I have had countless debates with people about Gaza’s rich Jewish past, with many confidently albeit ignorantly asserting that our nation has no time-honored connection to that particular strip of land.

So let’s set the record straight.

Simply put, Gaza’s vivid Jewish history stretches back to the beginnings of our people. Indeed, two of Israel’s founding fathers, Abraham and Isaac, sojourned in Gaza. In the Book of Genesis (20:1), the Torah says that Abraham “lived in Gerar,” a city located in Gaza.

Later, when there was a famine in the land and Isaac thought of leaving for Egypt, God stopped him in Gerar, and told him explicitly: “Dwell in this land, and I will be with you, and I will bless you; for unto you and unto thy seed will I give all these lands” (Genesis 26:3).

Isaac remained in Gaza, and it is precisely there – in Gaza, of all places! – that the Creator saw fit to reaffirm His promise regarding the Jewish people’s right to the entire Land of Israel.

After the Exodus from Egypt, when the Jews reached the Promised Land, Gaza was given to the Tribe of Judah (see Joshua 15:47) as a share of its eternal inheritance, and according to the Book of Judges (1:18), “Judah captured Gaza and its border.”

During the Talmudic era, Gaza was home to a large Jewish population. In the fourth century CE, some 200 years before Islam was even founded, Gaza served as the primary port of commerce for the Jews of the Holy Land.

Indeed, Rabbi Yaakov Emden ruled that “Gaza and its environs are absolutely considered part of the Land of Israel, without a doubt.”

“There is no doubt,” he added, “that it is a mitzvah to live there, as in any part of the Land of Israel.”

OUR CONNECTION to Gaza is so strong and deeply-rooted that even though Jews had been expelled from the area six times in the 1,900 years prior to the establishment of the State of Israel, they nonetheless returned to resettle it each time. In 61 CE, the Romans evicted the Jews from Gaza, as did the Crusaders, Napoleon, the Ottoman Turks, the British Army in 1929, and the Egyptians in 1948.

Hence, when the territory was liberated from foreign control in the 1967 Six Day War, it was only natural that Jews would again seek to make Gaza their home.

Unfortunately, much of this history was unknown to most Israelis prior to the “disengagement” in 2005, thereby making it that much easier to carry out. After all, since much of the public failed to appreciate our connection to Gaza, it is no wonder that many chose not to object.

And that is what makes it so crucial to educate the next generation about our historical bond to all parts of this land, and especially those such as Judea, Samaria and eastern Jerusalem, which much of the world wishes to see taken away from us. In other words, history matters, and that is the first lesson to be learned from the Gaza expulsion.

The second has to do with relying on the “experts” and talking heads whom the media often bring forward to promote whatever particular political agenda they might be pushing.

At the time of the Gaza pullout, the airwaves and newspapers were filled with confident-sounding analysts who assured us that by leaving the territory and expelling its Jews, Israel would be strengthening Palestinian moderates, undermining the extremists and taking away an excuse for them to attack Israel. They mocked opponents of the withdrawal, who presciently warned that it would bring disaster in its wake, as being detached from reality.

Fifteen years and thousands of Qassam rockets and mortar shells later, we now know just how accurate those “experts” were. Gaza is controlled by the Hamas terrorist movement and over the years it has exported projectiles rather than produce to the Jewish state.

So when these same pundits now try to persuade us as to why steps such as extending sovereignty over Judea and Samaria are dangerous, or accelerating the expansion of Jewish communities is a “provocation,” let’s just remember how effective their previous policy prescriptions turned out to be.

And that brings us to the third lesson to be learned from the destruction of the Jewish communities in Gaza. It is precisely because Gaza’s Jewish communities were not part of sovereign Israel that it proved relatively easy from a legal and civil standpoint to uproot them. In effect, Israel’s failure to annex the area after 1967 left the door open for its desertion in 2005.

And that is why, despite the coronavirus, economic difficulties and the tensions along the northern border, Israel must move forward now with extending its sovereignty over Judea and Samaria as soon as possible.

Formally incorporating these areas into the Jewish state changes their legal and administrative status and will make it manifestly more difficult for any future government to forego them.

Leaving Gaza was a human, strategic and political disaster, one for which Israel continues to pay a heavy price.

But as we recall the folly of the withdrawal, and mourn that which was lost, let us at least learn some important lessons from it. In doing so, we must reinforce our collective conviction that never again will the Jewish state expel Jews from their homes.