What is Behind the U.S. Protests 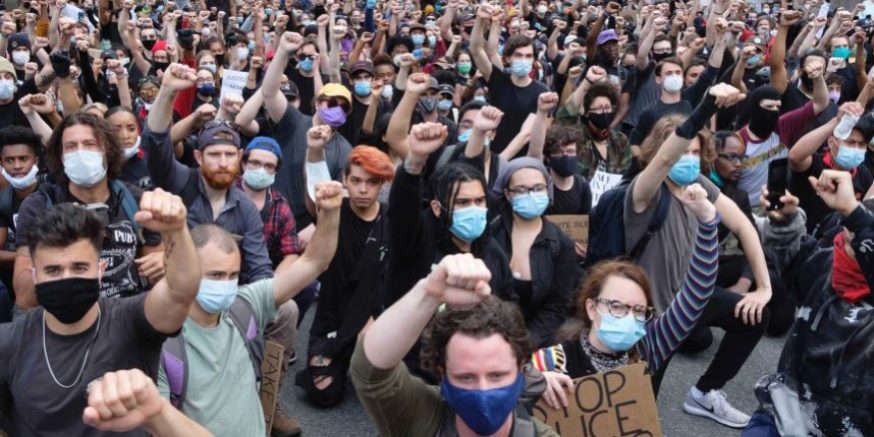 For more than two weeks the U.S. has been roiling in daily often violent versus peaceful protests over allegations of black racism and white privilege triggered by videos of the death of George Floyd in Minneapolis police custody arrested for passing a $20 counterfeit bill.

The nightly protests were set against the background of lurid flames and looting of minority owned businesses and fashionable stores from Manhattan to Santa Monica. In a Jewish Press opinion article entitled “God Is Dead,” Dan Greenfield illustrated how allies of the Black Lives Matter movement were torching African American and other churches including the President’s Church, St. John’s Episcopal on the periphery of Lafayette Park within steps of the White House.

That episode figured in a dramatic assault with tear gas and rubber bullets clearing the protests. Greenfield cited further evidence of a pogrom in broken windows at the 225 year Reform Temple in Richmond, Virginia and the Pro -Palestinian vandalism on the facade of an Orthodox Synagogue in the Fairfax section of Los Angeles; the latter indicative of “anti-Israelism the new antisemitism.”

Back in 2016, Tablet Magazine headlined a news report, “From Left to Right, Jewish Groups condemn ‘Repellent ‘Black Lives Matter Claim of Israeli ‘Genocide.’” What the media is not reporting is there are ominous signs that behind the “balagan” – chaos in slangy Hebrew- may be a disturbing anti-American Intifada.

To expound on this, Rod Reuven Dovid and Jerry Gordon brought back Dexter Van Zile, Shillman Research Fellow and Christian Media Analyst at the Boston-based Committee for Accuracy in Middle East Reporting and Analysis (CAMERA).

Van Zile says “that the Third Intifada is happening in the United States. What began as a War on Israel and American Jews has become a war on the republic itself? In support of his thesis, Van Zile argues:

• Many of same strategies used to delegitimize Israel and make it harder to defend the country are now being deployed against the US.
• The 2001 Durban Strategy has shifted from Israel to the U.S.
• The goal with Israel was to render the country ungovernable.
• Americans are going to struggling with the same effects felt by Jews in Israel as a result.

Nevertheless, Israelis united and overcame at great cost in blood and treasure the Intifada threats to the destruction of the Jewish nation that are still at the core of the BDS international campaign.

Van Zile says, “the same institutions that facilitated the propaganda war on Israel have been enlisted in the war on the American middle class.”

As evidence of this development, he points to the comments of Linda Sarsour, a US Born Palestinian supporter of Hamas and Sharia Law during a United Church of Christ- sponsored May 31, 2020 webinar on the uprising over the death of George Floyd. She said: “What we’re trying to do in this …televised revolution is that I’m saying this not in the literal sense, but in the sense of “Burn it all down. Start Over”. She called for defunding Police departments and abolishing the USDHS Immigration Control and Enforcement. Van Zile suggests that Sarsour is promoting an Intifada in the U.S. with the goal of overthrowing the system – making it ungovernable. All within the cloak of non-violent action.

Others on the UCC webinar supported Sarsour’s objectives with messages:
• The U.S. is an illegitimate nation founded on the sin of slavery.
• The U.S. was never a democracy.
• The white people in America are incapable of responding to legitimate justice demands from African Americans.

Van Zile points out that while the US may not be a perfect democracy, its system of governance is decidedly better than the totalitarian movements it has defeated in its history. He speaks of the belief in equal rights before the law that has served the cause of freedom in America’s foundational events – the Declaration of Independence, the ratification of the Constitution, the abolitionist movement and underground railroad that freed slaves, the Civil War and 13th and 14th Amendments, notwithstanding Supreme Court rulings that perpetrated Jim Crow Laws, reaching a climax in the Civil Rights movement and anti-discrimination and voting rights laws of the 1960’s.

Van Zile cites a book by Mae Cannon, “Beyond Hashtag Activism” published by Intervarsity Press. Ms. Cannon promotes of the work of Al Haq, a Palestinian “lawfare” group headquartered in Ramallah whose head Shawan Jabarin is also a member of the PFLP terrorist group.

Van Zile is concerned about the undermining of what have been middle class institutions in America. He cites churches, land grant colleges and the media “have become places of Anti-American political indoctrination.” A recent UCC webinar is indicative of the devolution of liberal Protestant denominations. Given his experience fighting “thought control” by a pro-Palestinian communications professor Dr. Jhally at the University of Massachusetts Amherst, Van Zile says: “ Colleges and Universities have turned into places where students worry more about being ‘woke’ than being able to ‘work’ when they graduate. Land – grant institutions, great engines for the Middle Class have been hijacked, need to be reformed.”

The resignation of New York Times Opinion Editor James Bennett’s departure was proof to Reason Magazine that “woke scolds were taking over” at the paper. The cause of the scolds was their objection on the grounds of “workplace safety” to an op-ed by US Arkansas Senator Tom Cotton.To Van Zile this was further evidence “that Middle Class ideas – law and order – are no longer acceptable in polite society.”

Despite his dour assessment, Van Zile spoke hopefully of “great awakening” about the Judeo-Christian values of middle class among young Americans, in a chapter in soon to be published book, directed at American Evangelicals.

What is behind the US Protests? Anti-American Intifada – Beyond the Matrix 🎧