Israel, a Land Flowing with Milk and Honey: Trashed by the Palestinians 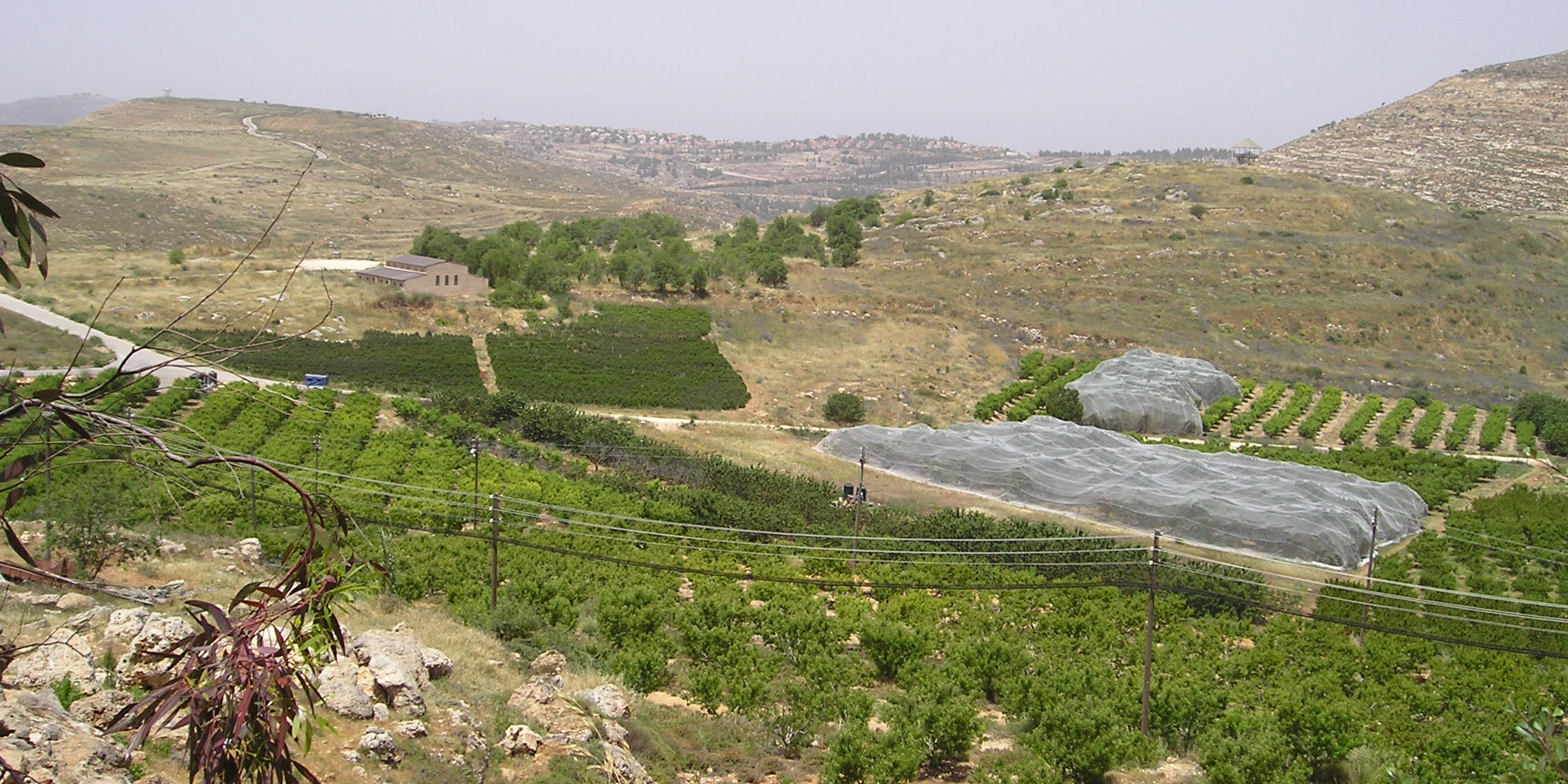 Milk and honey” refers to the nectar of the fruit, and a land “flowing with milk and honey” is an expression used for a particularly fertile land that could produce abundant produce and fruit. The saying is used several times in the Bible, each time conveying the richness of the Promised Land – The Land of Israel.

A land flowing with milk and honey is now a blessed reality in the reborn modern State of Israel, miraculously redeemed and reconstituted by its own indigenous Jewish folk after 2,000 years of exile. It is now once again a sovereign Jewish nation in its ancestral and Biblical homeland. The precious land, neglected and wasted for so long and which had endured successive alien occupations down the centuries, has been lovingly restored by the pioneering Jewish Israelis whose Zionist endeavor and undertaking banished the malarial swamps, turned the desert green and restored the hills and valleys to their verdant beauty.

Tragically the fraudulent Arabs who call themselves Palestinians show no love for the land or for nature’s bounty that the Jewish villagers and farmers have recreated throughout Israel and, in particular, within the Jewish heartland of Judea and Samaria. This is the very heartland a hostile world still insists on erroneously calling by its Jordanian Arab name, (the West Bank) after their illegal occupation from 1948 to 1967.

What the Palestinians are guilty of doing is enough to make the very angels in heaven weep. Daily murderous terror against Israeli civilians by the Palestinians continues and encouraged by the malevolent “pay to slay” policy instituted by the corrupt and patently evil Palestinian Authority. These atrocities are ignored by the immoral United Nations and by the equally and morally compromised European Union, which still squanders millions of Euros poured into the PA’s corrupt coffers.

But other despicable acts are perpetrated by the same criminal enterprise known as the Palestinian Authority. This report is of one such outrage done to the Jewish villagers and farmers in Judea and Samaria’s Binyamin region..

The headline of this report is as follows:

The mountain of illegally dumped garbage is highlighted in blue to differentiate it from the surrounding natural rocky terrain. 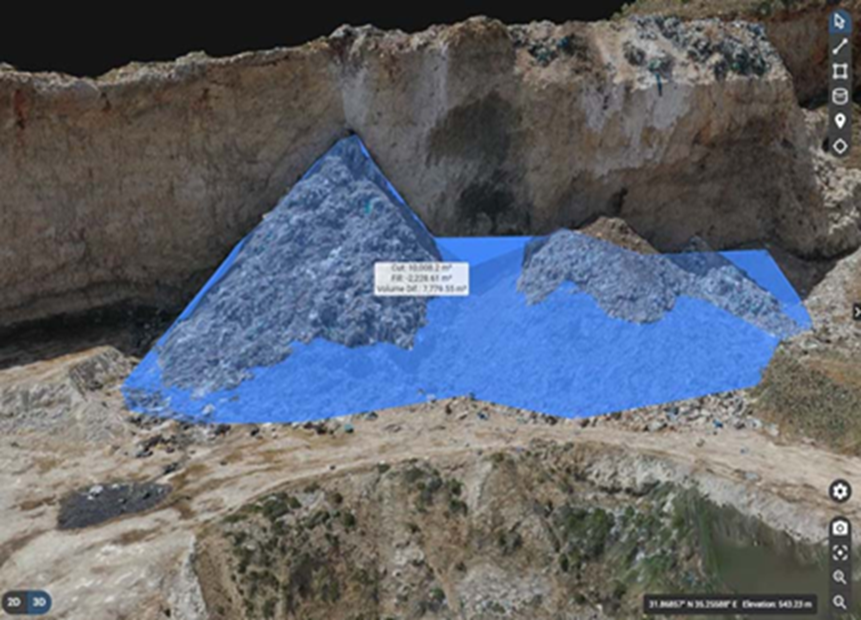 While the entire world was holding its breath following the progress of the coronavirus pandemic, with millions of Israeli citizens in quarantine, and law enforcement authorities reducing their activity, the Palestinian Authority seized the opportunity to illegally dump millions of gallons of garbage in Area C, which is meant to be under full Israeli control, Regavim reported.

In only a few weeks, millions of gallons of garbage from the Arab cities of Ramallah and Al-Bireh in Palestinian occupied Area A in Judea and Samaria were dumped in an abandoned quarry near the Binyamin area.

Hundreds of Arab owned trucks took advantage of the temporary lull in law enforcement and dumped their foul smelling contents from the top of a cliff straight into the quarry. Thousands of tons of garbage will now have to be set on fire, which will burn days and nights, making the lives of local Jewish villagers and farmers a living hell while creating a huge environmental disaster. But don’t expect Green Peace or the other international environmental organizations to utter a word of protest against the Palestinians.

The garbage, which had been accumulated in three huge piles, dozens of feet high, was estimated at about 10,000 cubic meters, or 2.2 million gallons.

Binyamin Council Head, Israel Gantz, said in a statement: “Garbage disposal pollution is an ecological terror attack. The natural beauty in our area is of no interest to the Palestinians.”

“Landfills throughout Judea and Samaria are often a choice the Arabs make for polluting the air and ground. The deliberate scale of huge pollution by the Palestinians in this particular landfill is something we haven’t encountered before,” an Israeli environmentalist said. “Enormous quantities of garbage have been piled up there in just a few weeks.

“In the past we had to guess, or try to estimate roughly the amount of Arab garbage and filth found in pirate landfills across Judea and Samaria. Today we deal with exact figures and it is appalling.

All Israel’s many environmental organizations will join in the fight against this grotesque eco-terrorism in Judea and Samaria in the hope of preventing any such Palestinian outrages from taking place in the future.”

This, alas, may be more difficult to control as the perpetrators are egged on and rewarded relentlessly and gleefully by the Palestinian Authority.

But the same PA under the control of the terrorist and Holocaust denying, Mahmoud Abbas, is guilty of other crimes against civilization. Numerous vandalism continues against ancient Biblical Jewish archaeological sites throughout Israel.

On Jerusalem’s Temple Mount, the Palestinian and Jordanian Muslim Waqf which occupies what is the holiest of all religious sites in Judaism and is holy also to Christianity – illegally destroyed two to three thousand year old ancient Jewish relics and dumped them unceremoniously in the nearby Kidron Valley. On the very site of the two ancient Jewish Temples it is unimaginable what precious remains of incalculable historical and spiritual importance were ripped from the ground and destroyed for all time by the Muslim perpetrators of this appalling crime.

More recently, the remains of King Herod’s citadel, which was sadly ceded to the Palestinian Authority during the baleful Oslo Accords – which now predictable have become the Oslo War because of continuing Palestinian terrorism and intransigence – is being systematically destroyed and the remains used as building material for new Arab settlements.

The destruction of Jewish archaeological sites by Palestinians throughout the Jewish homeland are so numerous that the following websites may help understand the enormity of ongoing Palestinian Arab crimes.

The Hirbet Astunah archeological site in the Shiloh Valley was the latest archaeological site to be raided and stripped by Arab bandits, the Shomrin Al Hanetzch (Guardians of Eternity) organization …

In the past two months several other archaeological sites have been damaged. A mosaic was vandalized at Hurvat Hanut near Jerusalem, a 1,300-year-old furnace was damaged near Yavneh, and a container holding artifacts was set on fire in Afula.

May 11, 2020 · The Palestinian Authority rolled heavy machinery over the remains of an ancient fortress, paving an access road that has destroyed the remains of the 3000-year-old fortress wall and water cisterns.

The Palestinian Authority (PA) has recently seized a Hasmonean-era fortress in Samaria and has converted it into “a Palestinian tourist site” as part of its campaign to seize Jewish heritage sites and transform them into “Palestinian sites” while systematically demolishing archaeological findings.

Mar 25, 2018 · Biblical tomb vandalized with Swastikas in Palestinian village “The Palestinian Authority is not capable and is not willing to safeguard these holy Israeli sites, so sovereign Israel must do so.”

Victor Sharpe is a prolific freelance writer and author of seven published books including the acclaimed four volume work titled, Politicide: The attempted murder of the Jewish State. He has also authored a book of 13 short stories each with a surprise ending titled, The Blue Hour. These and other books may be found on Amazon.com.