‘My son is a hero’: Hundreds attend funeral for soldier killed in West Bank raid 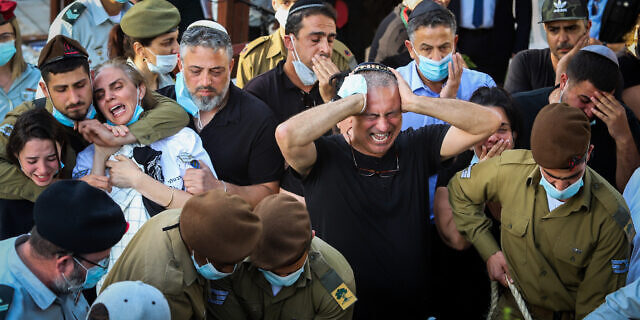 Hundreds of people on Tuesday attended the funeral of Israel Defense Forces soldier Amit Ben-Ygal, who was killed overnight during a raid in the West Bank.

The funeral was held at the military cemetery in the central city of Beer Yaakov.
“I love you so much. My son is a hero,” Ben-Ygal’s mother, Nava Revivo, cried out over his grave, according to Channel 12 news. “I’ll be strong. Guard us from above.”

“You changed my life. My firstborn child. My beloved child. Your sisters don’t understand what’s happening. We’ll preserve your memory, your happiness, your love,” she said.

Ben-Ygal’s father also eulogized the slain soldier, his only child.

“Amit isn’t an only child. He has millions of other siblings who are sad, who admire and who know our lives in the Land of Israel depend on the courage of Amit and his friends,” Baruch Ben-Ygal said.

Defense Minister Naftali Bennett spoke at the funeral as the representative of the government.

“Golani soldiers, you’ll go back to fighting and find the terrorist and wicked who did this and together we’ll defeat our enemies,” he said.

Ben-Ygal, a member of the Golani Brigade’s reconnaissance unit, was struck in the head by a large stone or brick during an operation in the Palestinian village of Yabed in the northern West Bank.

IDF troops detained over 10 residents from the building where the block was thrown.

They are not necessarily suspected of having perpetrated the attack, but were brought in for questioning due to living in the building where the attack was carried out, an army spokesperson said. Continue Reading….