Is it wrong to let Israel make decisions for itself? 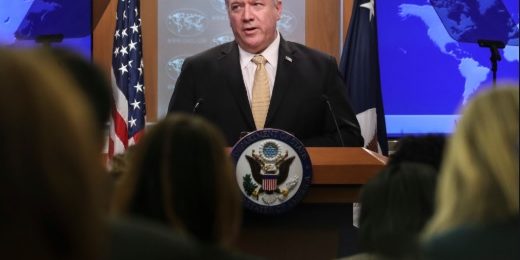 In principle, U.S. Secretary of State Mike Pompeo’s answer to a question about Israel’s new coalition government seems unexceptionable. The agreement signed by Prime Minister Benjamin Netanyahu, and Blue and White Party leader Benny Gantz allows for a vote in the upcoming months about extending Israeli sovereignty to parts of the West Bank, including settlement blocs and the Jordan Valley. As far as Pompeo is concerned, whether or not they do so is up to the Israelis.

According to Reuters, Pompeo said, “As for the annexation of the West Bank, the Israelis will ultimately make those decisions. That’s an Israeli decision. And we will work closely with them to share with them our views of this in private setting.”

That wouldn’t have been the reaction from President Barack Obama’s State Department, nor is it fair to say from the administrations of Presidents George W. Bush, Bill Clinton, George H.W. Bush or even Ronald Reagan. They would have all fervently and publicly opposed any Israeli talk of annexation, let alone plans to implement the idea.

The difference between the administration of President Donald Trump, which put forward a plan for the Middle East earlier this year that envisioned Israeli holding onto approximately 30 percent of the West Bank in the context of a scheme that would have also allowed the creation of an independent, though demilitarized Palestinian state, is not just about the contours of a solution to the conflict.

What really sets Trump and Pompeo apart from their predecessors is that the current American government doesn’t think that it is entitled to dictate policy to the Israelis. And it is this unwillingness to give orders to the Jewish state that really shocks critics of Israel and the foreign-policy establishment.

Obama wasn’t reticent about expressing his feelings about the relationship between the two countries. Though at times he paid lip service to the strong affection felt by the overwhelming majority of Americans for Israel, he never bothered to conceal his disdain for any notion that the Israelis should be treated as equals. He was explicit about believing that he had the right to “save Israel from itself” since the policies adopted by its democratically elected government were not in accord with his own unrealistic vision of how to achieve peace. He believed he had the right to override the will of the Israeli people as expressed at the ballot box, and many of his American Jewish adherents agreed with him about that.

And despite the far friendlier tone adopted by George W. Bush towards Israel, he, too, didn’t differ much about whether or not the Israelis had the right to make decisions for themselves. As Israel’s sole superpower ally, the United States has always arrogated to itself the right to expect the Israelis to do as Washington instructed. Continue Reading….