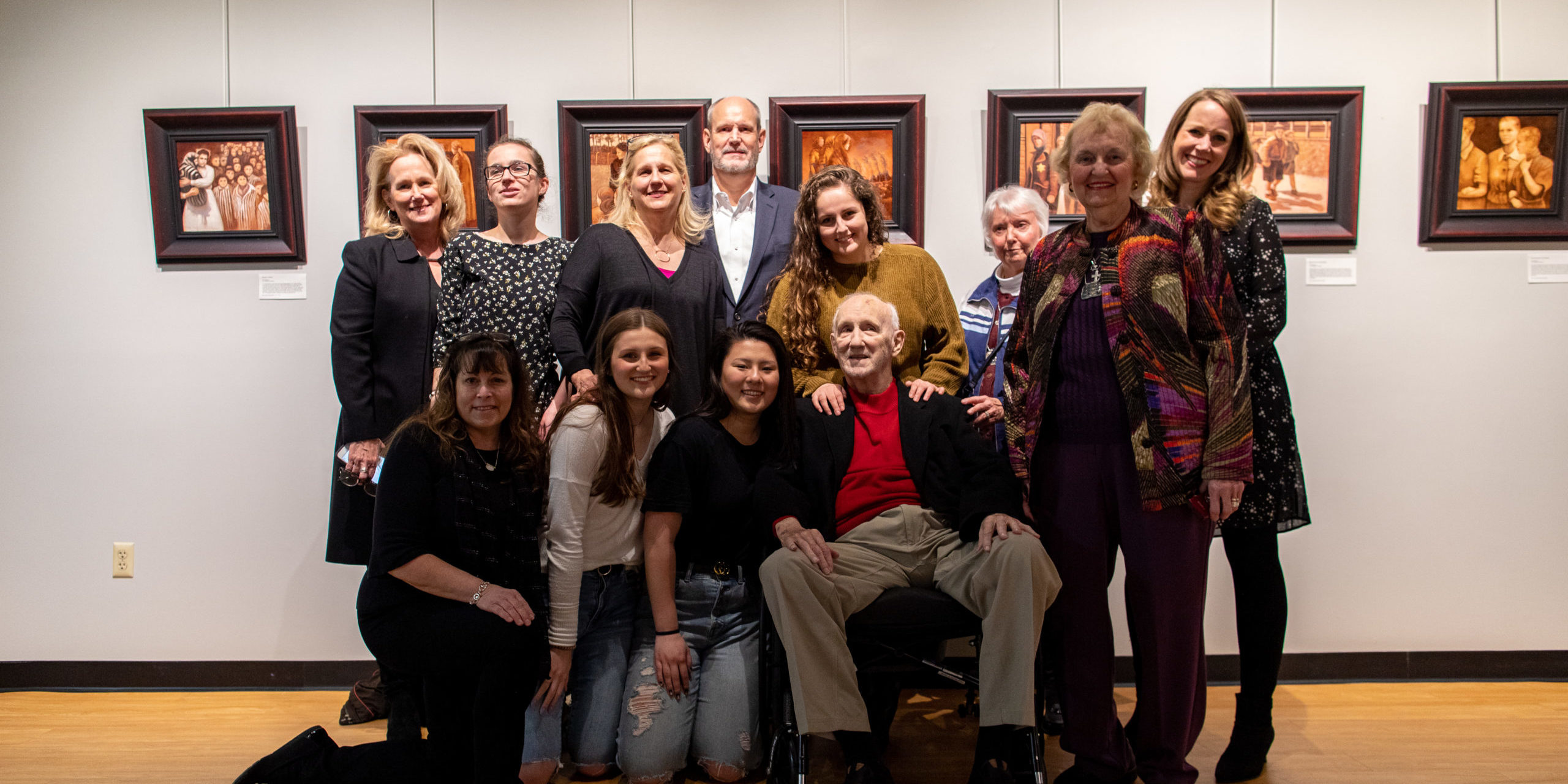 On Thursday night, February 27th, I drove three hours to Liberty University to attend the opening of an art exhibit that is very special to all of us here at Jerusalem Connection, especially Jim Hutchens.

As many of you know, Jim’s wife, Pat Mercer Hutchens, went home to be with her Savior on March 31, 2014. In the four years before she died, Pat painted The Auschwitz Album Revisited. Although she was a prolific painter her entire adult life, it was this last series that meant the most to her and brought all her passions and talents together.

The Auschwitz Album Revisited is based off the 193 black and white photographs in an album by Lily Jacobs, a survivor of Auschwitz. The pictures were taken in June of 1944 as an SS officer documented the arrival of a train full of Hungarian Jews. It is the only surviving photographic evidence of the Nazi’s selection process, which is otherwise known to us from the testimonies of survivors. Since the Nazis had done everything that they could to keep the ‘final solution’ a secret, pictures from inside the extermination camps are almost nonexistent apart from this album.

Lily had been shuttled camp to camp in the waning days of the war. After liberation, she waited for medical help in an abandoned SS barracks at the Dora concentration camp inside Germany. In a coincidence that can only be explained by recognition of the Divine Hand, Lily found the album in a cupboard beside her sick bed. Astonishingly, in the 56 pages, Lily saw pictures of herself, her family, and her entire community on the day their ghetto arrived to ramp at Auschwitz. To put this in perspective, Lily was recovering in a room 400 miles away from Auschwitz; the estimated number of Jews brought to Auschwitz is 1 million. Lily kept the album for decades, sharing photos with other survivors in the pictures, but ultimately Lily donated it to Yad Vashem in Jerusalem. 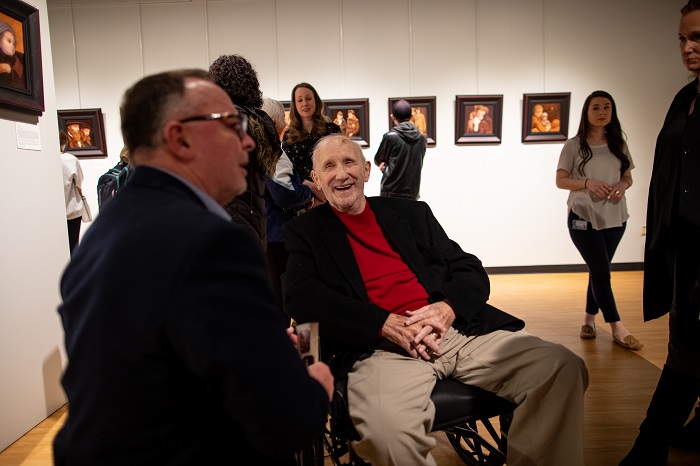 When Pat first saw the pictures in the album, she began to have nightmares. In her dreams, she walked through the camps and tried to resuscitate the women and children as she passed their lifeless bodies. When she awoke, she understood that she was called to paint the victims. She singled out different individuals from the photos from the masses, whether or not they were waiting in the groves or standing on the ramps.

She painted women looking out the train window. She zoned in on rabbis deep in thought as they looked out to the crematoriums. She painted whole families as they sat inside the birch grove, unaware of their coming forced separation. She painted women who had just been stripped of their belongings, shaved, and deloused. Through it all, she recognized that each painting was done in love. It was her loving brush that could not bring them back to life but could honor their memory, even if the person behind the lens was one of the many trying to strip the Jewish people of their humanity.

As some of you may or may not know, Jim Hutchens is approaching his 86 birthday this summer. His own health has been in decline this last year and particularly these last few months. As Jim acknowledges to us all, God is good, but age is not always as kind. When I told Jim that Liberty University was going to exhibit all forty of Pat’s paintings in a matter of weeks, he said to me in a quiet but determined voice, “We are going on a road trip!” And that is exactly what we all did.

By Jim’s side on opening night were all three of his children and several of his grandchildren. Marilyn Henretty and Marilyn Levar from our TJCI office also made the trip.

That first night, over ninety young undergraduate students filed into the art gallery. I was so impressed seeing the way each student studied the paintings and took the time to read Pat’s explanations under each portrait. The students took the art seriously, reflecting on its meaning and significance. In an age that the horrors of the Holocaust are growing more distant and sometimes blurred, it was heart-warming for all of us to see that Pat’s dream was coming true. She was educating the next generation, cementing their commitment to “Never Again,” as the face of every man, woman, and child in those paintings left an impression on their hearts.

If you would like to see the paintings yourself, the exhibit goes until March 9th. It will reopen again for the month of May when parents from all over the U.S. descend on Liberty for graduation season. The Liberty Art Gallery is open Monday through Friday from 8 a.m. to 4:30 p.m. and on Saturdays from 12 p.m. to 3 p.m. The Liberty University Art Gallery is in Marie F. Green Hall and is free and open to the public.

One thing God has placed on my heart is the idea to put a book together that includes all forty of the paintings along with Patty’s descriptions which I believe were also given to her by God. I realized seeing all forty of the paintings together that as much as I love the originals, no one could ever have all forty prints in their home. These are serious and sometimes distressing pictures. They belong together and to be absorbed together just as Patty painted them. This project will take some additional financing, but my goal is to have it ready in time for Liberty’s second exhibition of the paintings. I would love for these students to have something that they could take away from the exhibit and continue to learn and grow. Would you please consider helping with this endeavor? I will commit my time but the ministry will need additional financial commitments to see to it that these are printed in a high quality manner so that they catch all of the nuance and details of each portrait.

If you would like to donate particularly to this project, please click here. Any donations is appreciated. If you prefer to not donate offline, send in a donation to the address below and note on your check or donation “Book for The Auschwitz Album.”
Jerusalem Connection
P.O. Box 20295
Washington, DC 20041