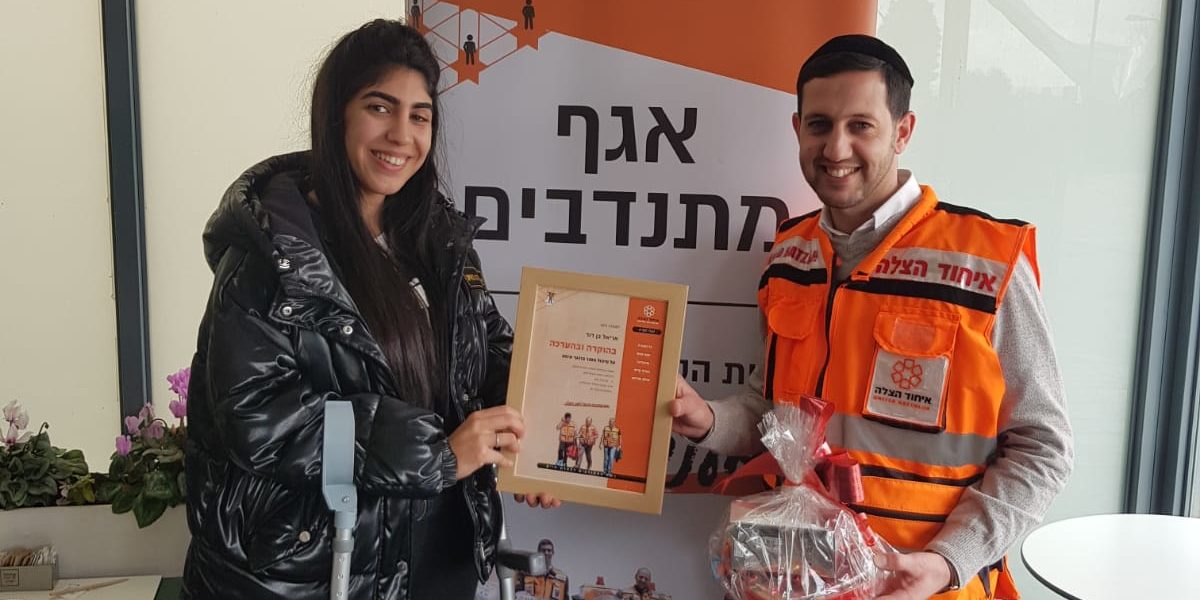 Eden Mantsur from Jerusalem was among the five soldiers who were injured after a Palestinian terrorist drove his car into them in a ramming attack at the Hizme checkpoint in July 2019. Eden was seriously injured and required immediate medical attention. For the first time since the attack occurred, Eden met with volunteer EMT Ariel Ben David who was the first responder at the incident and treated her injuries at the scene. The treatment that Ariel provided, prevented severe medical damage from occurring and may very well have saved Eden’s life.

“I remember that after I was struck by the car that I was lying on the ground in intense pain. Out of nowhere, Ariel arrived like an angel,” Mantsur said during the meeting.

Mantsur served in the Search and Rescue division of the IDF during the time of the attack. She was on duty at the Hizme checkpoint near the Pisgat Ze’ev neighborhood of Jerusalem when the attack occurred. When she was hit by the car, Mantsur was lifted into the air and landed several meters away. The first person to arrive at her side was United Hatzalah volunteer EMT Ariel Ben David who left his home in Pisgat Ze’ev when he received the alert from dispatch about the attack. Ben David found Mantsur lying off to the side of the road in some bushes with several broken limbs and injuries to her upper body. He began medical treatment immediately, something that prevented her situation from deteriorating and causing irreversible damage.

After the incident, Ben David kept in touch with Mantsur in order to see how she was recuperating. Last week, the two met again in person for the first time since the attack in Shaare Zedek hospital where Mantsur is undergoing physical therapy. Mantsru had requested the meeting and United Hatzalah’s volunteer department arranged for Ariel to attend and meet with her in person. Mantsur, who is still supported by crutches, was moved to meet Ariel once again, and even presented Ariel with a commendation for his service. “I remember that when Ariel arrived he treated me in a calm and collected manner. He was devoted to his work, courteous and professional. He moved everyone away from me and gave me the best treatment possible in the field. His actions and attitude calmed me down as I knew that I was in good hands.”

Ben David spoke about his actions and how he felt to meet with Eden once again: “When I arrived at the checkpoint I saw a mass of confusion. I was told that there was a seriously injured soldier and that she was off to the side of the road. I ran to her and began treating her for her injuries for a long time. I understood that she was suffering from broken bones throughout her entire body. I saw that she was semi-conscious. I fought for her to ensure that she didn’t lose consciousness completely. I spoke with her and made sure that she did not deteriorate any further until she was finally transported to the hospital.”
Mantsur added: “Every time we speak I thank Ariel again and again. I remind him that he was my rescuing angel. I want to thank United Hatzalah for giving volunteers like Ariel the tools and capabilities to save lives. It is because of them that I am standing here today.”
Media contact: Raphael Poch, International Media Spokesperson, United Hatzalah, Jerusalem Cell: +972-52-689-7624; e-mail: raphaelp@israelrescue.org; To Donate: https://israelrescue.org/donate