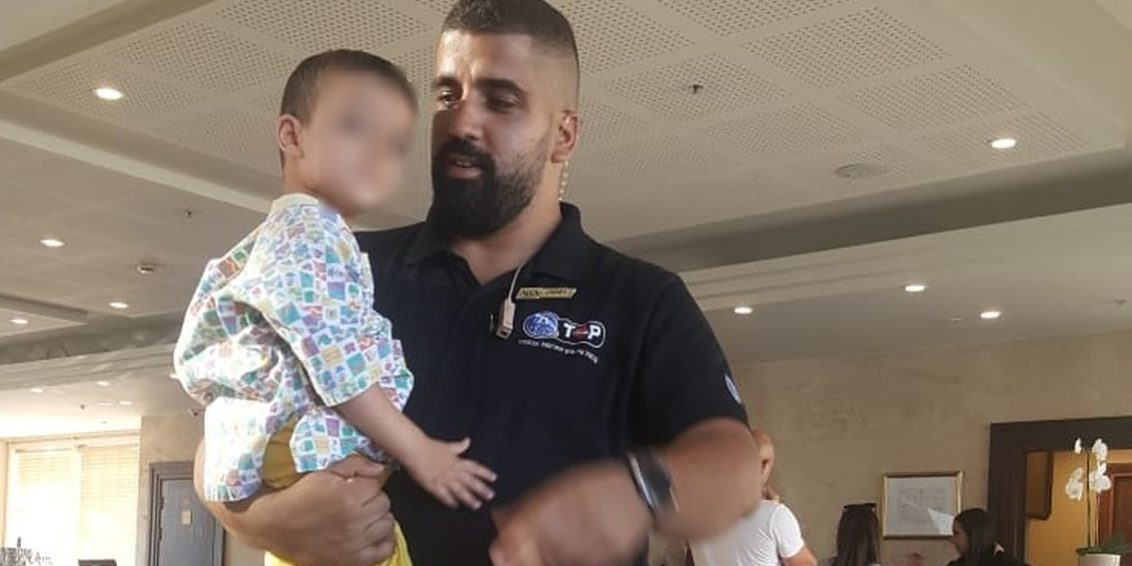 Jamal Veraki is 29-years-old and works as a security guard in a hotel in the southern city of Eilat. Jamal recently graduated from his EMT training course and was one of a handful of Muslims in that did so in Eilat. He has been a volunteer with United Hatzalah for just six months and in that time he has saved the lives of six people, some of whom were guests in the hotel that he works in.

In October, Jamal saved a young boy who was a hotel guest and had choked on a small piece of food. The boy’s father brought the boy, who was quickly turning blue, to the nearest hotel employee and begged for help. The employee knew that Jamal was a trained EMT and called him on the radio to rush over. In seconds, Jamal was at the scene and performed a successful CPR and got the boy breathing again.

Another recent call was for a little boy, choking and gasping for air in the hotel restaurant! Management alerted Jamal to the emergency and within mere seconds the United Hatzalah medic was on the scene. He secured a clear airway and reassured the boy’s mother, as her 3-year-old son started breathing again. Learning that the patient has a serious allergy to peanuts, Jamal advised the mother to administer the child’s allergy medications “just in case” and pursue follow-up medical care.

Thirty minutes later, Jamal received a second emergency alert, this time to an incident unfolding in the hotel lobby. Racing over, Jamal found a toddler lying unconscious on the floor. He provided a lifesaving shot from the boy’s EpiPen Jr. and supplied high-flow oxygen, checking vital signs to confirm his assessment that the child was in the throes of severe anaphylaxis. Jamal carefully monitored his patient, conferring with a United Hatzalah physician as the child’s condition stabilized and he started to regain consciousness.

At the end of the family’s eventful vacation in Eilat, the young toddler ran over and gave Jamal a hug. The boy’s parents snapped a photo, thoroughly undermining Jamal’s tough-guy image as the hotel’s security guard. The little boy is alive today thanks to Jamal’s rapid intervention and medical expertise.

On the evening of Sunday, January 5th, an elderly man collapsed at his home in Eilat. Anxious family members called the emergency hotline for help. Jamal was busy working at the hotel when dispatch alerted him to the emergency and he quickly rushed to the location. Finding the patient with no sign of cardiac activity, Jamal and a pair of United Hatzalah colleagues launched into emergency CPR, interspersing chest compressions with assisted ventilation. The man’s loved ones watched in trepidation, and after 15 minutes of strenuous efforts, the medics managed to restart the man’s heart. The patient even started breathing again independently. An intensive care ambulance arrived and Jamal hopped in the back, assisting the under-staffed ALS crew as together they evacuated the man to the hospital. Jamal later received a special message of gratitude from the Chief Paramedic, citing the volunteer’s professionalism and dedication in going the extra mile.

Jamal reflected on his eventful first few months as a first responder and said: “I’ve had five or six emergency calls in the hotel itself that have been lifesaving. The hotel staff already knows to call me whenever there is a medical emergency in the hotel or in the vicinity. It is life-changing for me to know that I have this ability to save people’s lives whenever there is an emergency. Since I finished my course six months ago, I’ve saved three children’s lives. Some people go through their entire life without saving another but I’ve done it six times in as many months and that is simply incredible.”

Jamal continued: “Whether the medical emergency happens in the hotel or nearby, my boss tells me to leave and head out to save lives even in the middle of my shift. Whenever he hears my radio go off, he says, go and save someone’s life. The rest of the staff come to take over my responsibilities while away. They have really come to understand the power of having volunteer responders all over the country and in our midst. People know what the logo and symbol of the organization mean and I am proud that in my short time of just six months I have managed to make such a difference. ”