To A City of Galilee Named Nazareth 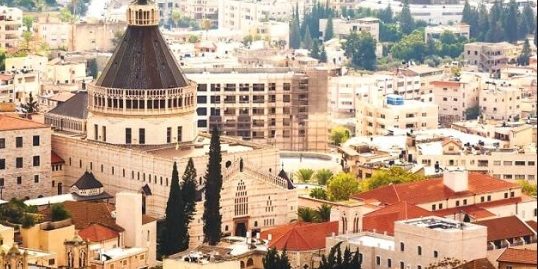 Christmas pageants around the world begin with these introductory words out of the Gospel of Luke: “Now in the sixth month the angel Gabriel was sent by God to a city of Galilee named Nazareth, to a virgin betrothed to a man whose name was Joseph, of the house of David. The virgin’s name was Mary” (Luke 1:26–27).

The angel Gabriel’s announcement to Mary that she will give birth to the Savior is one of the most astonishing moments in history—not only because of God’s intervention in the human story but also because of Mary’s response. This unwed, religious teenager says yes to God, without question, reservation, or hesitation: “Behold, I am the servant of the Lord,” she said, “Let it be to me according to your word” (Luke 1:38).

Mary’s response proves she was the right girl for the job. A deeper look at her story, however, reveals a God who had been busy at work for centuries to bring about this special moment. He had revealed bits and pieces of the story to the prophet Isaiah 700 years earlier, then maneuvered kingdoms, exiles, revolts, and a government census to connect the dots and weave this most beautiful of stories.

Born in David’s City
Joseph and Mary were both of the lineage of David, which means their ancestors were not originally from the Galilee but the southern Judean region. Hence, they were required to appear in Bethlehem to be registered at the time of the Roman census.

Their ancestor, King David, had been born in Bethlehem, and the prophet Micah had prophesied that one of David’s descendants—the coming Messiah—would also come from there: “But you, Bethlehem Ephrathah, Though you are little among the thousands of Judah, Yet out of you shall come forth to Me The One to be Ruler in Israel, Whose goings forth are from of old, From everlasting” (Micah 5:2, emphasis added). For this reason, first-century Jews expected the Messiah to be born in Bethlehem.

Jesus of Nazareth
Because of Jesus’ humble birth, and because his family fled Bethlehem when he was a toddler, he did not go through life known as “Jesus of Bethlehem.” One would think that the “son of David” would have been identified more closely with this city of King David‘s royal birth. He was not—the Gospel of John indicates many Jews did not even know Jesus had been born in Bethlehem and, therefore, thought he lacked that messianic qualification (John 7:41–43).

That is because another city featured more prominently in the life of Jesus—so much so that it became the identifying part of his rather common name—Jesus of Nazareth. Years after his death and resurrection, even Jesus identified himself to Saul on the road to Damascus as “Jesus of Nazareth” (Acts 22:8).

The Gospel of Matthew attempts to explain the significance of Nazareth as another fulfillment of prophecy: “And he came and dwelt in a city called Nazareth, that it might be fulfilled which was spoken by the prophets, ‘He shall be called a Nazarene’” (Matthew 2:23, emphasis added).

However, the Bible includes no such prophecy, which has led to much discussion about what Matthew was referring to. There seems to be more than meets the eye when it comes to Jesus’ boyhood hometown of Nazareth. Continue Reading….