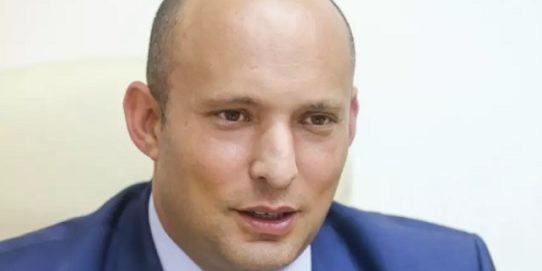 Israel’s newly appointed Defense Minister’s first week was challenging with over 400 rockets fired at Israel from Gaza but he began it in proper fashion. After being sworn in on Tuesday morning, Bennett spent the night in the ministry dealing with the Islamic Jihad attacks.

Yeshiva World reported that Bennett began his first full day as a minister by attending morning prayers in the ministry building’s synagogue wrapped in a tallit (fringed prayer garment) and tefillin (phylacteries).

His devotions stand in marked contrast to Avigdor Liberman whose resignation in November 2018. Liberman refused to join a right-wing coalition in the last two rerun elections because he is not willing to sit in a government with the religious parties. Bennett, on the other hand, was raised in a religious family and is religiously observant.

It is expected that Bennett’s term as Defense Minister will differ in other significant ways from that of Liberman. Liberman brought to the Defense Ministry one year experience in the IDF as a corporal in the artillery. Bennett served in the Sayeret Matkal and Maglan commando units as a company commander and continues to serve in the reserves today with the rank of major. During the 2006 Lebanon War, he was called up as a reservist in the Maglan special forces unit and participated in a search and destroy mission behind enemy lines, operating against Hezbollah rocket launchers.

Bennett’s term as Defense Minister began in particularly fiery fashion. Under his direction, the IDF Operation Black Belt has responded to over 400 rockets by killing some 20 terrorists in the last 48 hours.

“A terrorist who attempts to harm Israeli citizens will not sleep well at night, not in his home, not in his bed and not in any hiding place,” Bennett said in a statement to the media. Read more by Adam Eliyahu Berkowitz on Breaking Israel News