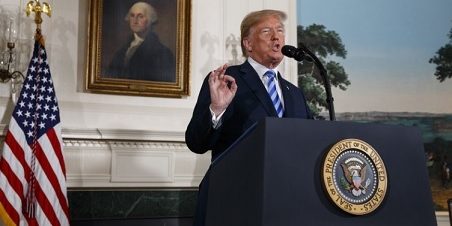 President Donald Trump’s withdrawal of US troops from a crucial area of the Turkey-Syria border, widely seen as an abandonment of America’s Kurdish allies there, has reinforced the resonance of a series of “emergency” warnings issued by Israeli leaders in the days leading up to Wednesday’s solemn Yom Kippur.

Israel’s concern, as Channel 13’s military analyst Or Heller put it on Wednesday night, is that “Trump’s isolationism” will encourage Iran to do what it did to Saudi Arabia’s oil facilities last month: attack.

When the new Knesset was sworn in last Thursday, Prime Minister Benjamin Netanyahu warned that Israel was facing a dire challenge from an increasingly emboldened Iran. “This isn’t spin, it’s not a whim, this is not ‘Netanyahu trying to scare us,’” he insisted. “Anyone who knows the situation knows that Iran is getting stronger and is attacking around the world, saying clearly, ‘Israel will disappear.’ They believe it, they are working toward it, we need to take them seriously. That reality obligates us to act. Remember my words and heed them.”

More understatedly but along the same lines, President Reuven Rivlin warned that same day that Israel currently had security needs “the likes of which we have not known for many years.”