Shifting sands between Trump, the Middle East and Israel brought some surprising and striking changes for the recently celebrated Jewish New Year.

Rosh HaShana, the Jewish New Year, was observed September 30-October 1. With the Jewish New Year came greetings and blessings to Jews in Israel and around the world from officials and prominent journalists from Saudi Arabia, the United Arab Emirates (UAE) and Bahrain.

The well wishes came in English, Hebrew and even in traditional Jewish New Year songs.

First, the Saudi ambassador in Washington, Reema Bint Bandar (herself a bit of a mold breaker in Saudi society as a woman and a divorcee) sent the following greeting card:

Next, we saw UAE’s Minister of Foreign Affairs Abdullah Bin Zayed wish Jews a “Shana Tova,” (Hebrew for a “good year”). His tweet was reposted by a Palestinian journalist from Gaza who wrote: “When people congratulate their Jewish cousins on the Jewish New Year in Hebrew, their language, honor has reached its peak.” Continue Reading… 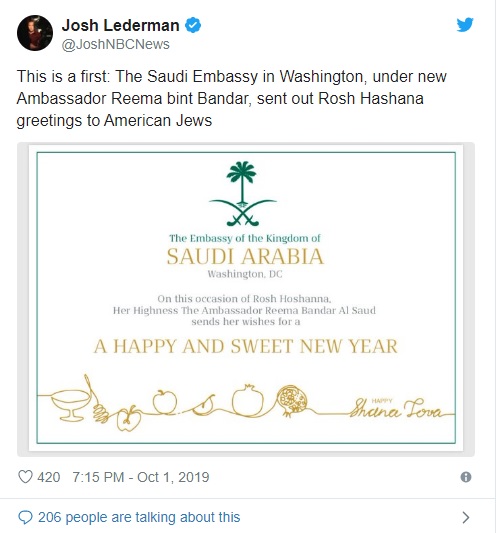