Abbas at UN: I’ll Give my Last Penny to Families of ‘Martyrs’ AKA Terrorists 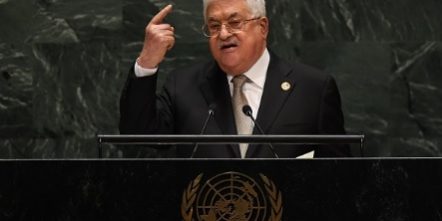 In his latest United Nations speech on September 26, Mahmoud Abbas was introduced as “His excellency, President of the STATE of Palestine.” We know Palestine is not a functioning state but let’s move on from this United Nations and world-wide fantasy to one of the the most appalling declarations Abbas made. His speech’s double-talk reached its zenith when he declared early on, “We will resist occupation by all available means. This is our legitimate right.” He later added, “We always extend our hand for peace and through negotiations alone.” Then, he unashamedly exposed his admiration for evil when he proclaimed, “I salute our honorable martyrs. We salute their families. We will protect their rights. If I only have one penny left, I will give it to them.” Abbas calls them martyrs. I call them terrorists who have murdered and maimed thousands of Israelis.

For decades, the Israelis have practically twisted themselves into diplomatic pretzels in their efforts to make peace yet to no avail. The world of course criticizes Israel yet overlooks embedded Palestinian intransigence. As a Pro-Israel Christian Advocate, I’m frankly delighted that Israel seems to operate now in the clear-eyed reality that they have no peace partner. Israelis are now untwisting themselves from pretzel-hood. Yet, I know that if the day ever arrives when Abbas will actually sit down for direct negotiations, Israel’s leaders will be there. Yet, history is instructive regarding Abbas.

When Palestinian Authority President Abbas spoke at the United Nations, one could easily assume-looking at his clothing-that he is like any Western leader. The truth is far different. Abbas is a terrorist in a suit, mentored for 40 years by Yassar Arafat, the grandfather of weaponizing airplanes for terrorism. Arafat perfected propaganda with smiles that were a facial portrait of lies with a deviously illustrious career which won him the coveted Nobel Peace Prize. His pupil Abbas operates with the skillful hypocrisy of glorified victimhood by blaming Israel for every woe. He has refused to disband his airwaves of hatred and instead chooses to run his kleptocracy, build a multi-million dollar home, and has not met with PM Netanyahu in direct negotiations for ten years. Add to that, he’s not held elections since 2006, choosing to blame the Hamas takeover of Gaza. The terrorist in a suit is a dictator who is oppressing the Palestinians and preventing them from a better life.

PA President Abbas has maintained and perfected powerful weapons passed down by this hero Arafat. He manipulates the United Nations, International Criminal Court, and maybe worst of all, weaponizes Palestinian media to propagandize his people, young and old, with hatred toward the Jews. Using the Voice of Palestine under the Palestinian Broadcast Corporation based in Ramallah, hatred is mainlined into the population. It’s a poison which deadens minds and hearts. Hitler and Goebbels’ media operation proves the horrific results of controlling entire populations with lies. Continue Reading….