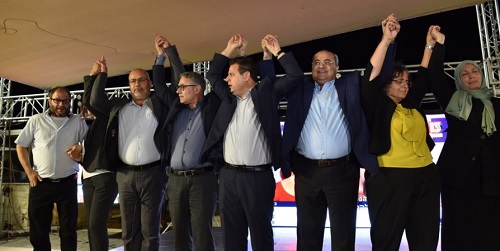 Responding to the unprecedented cooperation between the Zionist “Blue and White” party and the anti-Zionist Joint Arab List, Avigdor Liberman, at present Israel’s “kingmaker,” said his party would not recommend Blue and White chief Benny Gantz as the next prime minister largely due to this unholy alliance.

Liberman stated in no uncertain terms that the members of the Joint List are enemies of the Jewish state, and he will not join forces with any party that relies on enemies. “They are definitely our enemy,” said Liberman during a press conference prior to his meeting with President Reuven Rivlin, at which he declined to recommend any candidate for prime minister. “In the Israeli parliament,” he clarified, “there is a party that seeks to destroy us from within. Their place is in the Palestinian parliament, not in Israel.”

To back up his point, Liberman provided one example out of many for why the Joint List should be considered a fifth column, namely the fact that Joint List head Ayman Odeh boycotted the funeral of late-President Shimon Peres, but did pay a very public visit to the grave of Yasser Arafat. There are many more examples of Joint List lawmakers openly praising acts of terrorism against Israel and even calling for the Jewish state’s demise.

But perhaps most telling was what Joint List MK Ahmad Tibi blurted out during his party’s meeting with Rivlin on Sunday, when he told the president of the Jewish state that “we are the landlords here!” Continue Reading….