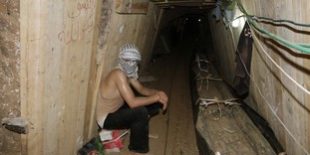 The Hamas-ruled Gaza Strip has long been serving as a center for various terrorist groups that are responsible for thousands of terror attacks against Israel. In the past few decades, these groups have engaged in smuggling various types of weapons from Egypt into the Gaza Strip.

The Palestinian terrorists also appear to be smuggling various types of illegal drugs into the Gaza Strip. Alarmed by the increased smuggling of illegal drugs, Hamas has begun waging a campaign against the drug-traffickers.

Earlier this year, Hamas announced that its security forces seized a large shipment of hashish smuggled from Egypt into the town of Rafah in the southern Gaza Strip.

Later, the Hamas-controlled Ministry of Interior launched a hotline for anonymous feedback and tip-offs on drug-related crimes.

The crackdown came in the aftermath of charges that the Hamas rulers of the Gaza Strip were not serious about dealing with the problem of drug trafficking.

According to some reports, many of the drug dealers caught by Hamas often buy their way out of prison by paying large amounts of bail in cash to Hamas-controlled courts. Some of the drug traffickers and dealers, who are known for their affiliation with Hamas, avoid prosecution: in addition to the illegal drugs, they also smuggle weapons for Palestinian terrorist groups.

Palestinian journalist Mirvat Oaf noted that the smuggling tunnels along the border between the Gaza Strip and Egypt have long been playing a major role in flooding the Hamas-ruled coastal enclave with various types of illegal drugs.

Instead of acknowledging their responsibility for failing to combat the drug trafficking, the leaders of Hamas have been trying to blame everyone but themselves. Continue Reading…