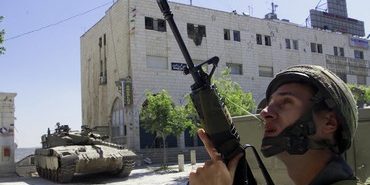 Palestinian Authority President Mahmoud Abbas recently claimed that the Palestinians were the descendants of the Canaanites. “This land is for its people, its residents and the Canaanites who were here 5,000 years ago – and we are the Canaanites!” he declared, vowing that every Israeli stone and house “built on our land” would end up “in the garbage dump of history.”

Any Western Palestinian supporter might have been left somewhat perplexed. After all, it’s an article of faith among those hostile to Israel that the indigenous inhabitants of the land are Palestinian Arabs who have been supplanted by Jewish occupiers.

Since Canaanites were said to have been conquered by the Jews, Abbas is laying claim to Canaanite ancestry to give the Palestinians a prior right to the land of Israel. But if they were actually Canaanites, then they can’t be Arabs, who many centuries later came, as the name implies, from the Arabian Peninsula, just as the Philistines, from whom in other moods the Palestinians also claim to have descended, came from Crete.

Abbas’s argument is, of course, ludicrous. The fact is that the Jews were the only people for whom the land of Israel was ever their national kingdom, several centuries before the creation of Islam.

The Jews are the only extant indigenous people of the land. Palestinian identity was invented in the 1960s in order to destroy the Jews’ claim to Israel and airbrush them out of their own history. Continue Reading….