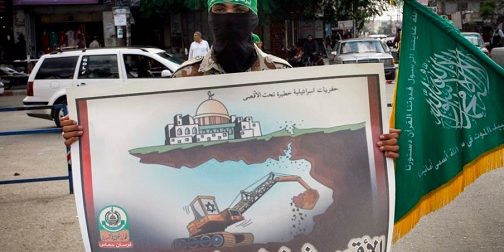 The clashes witnessed atop the Temple Mount this week as the Jews’ mourning day of Tisha B’Av coincided with the start of the Muslims’ festival of Eid al-Adha were a reminder of how explosive the holy site remains.

The Palestinian leadership needed no reminding. For the past several years, amid waning interest in the “two-state solution,” Palestinian Authority Chairman Mahmoud Abbas has been trying to reignite the situation primarily by issuing urgent warnings that Israel plans to divide the sacred plateau in preparation for rebuilding the Jewish Temple. These belligerent statements, combined with ongoing institutionalized incitement, have resulted in numerous acts of violence and terror.

But Abbas is reading from an old playbook. The alleged conspiracy of the Jews against the Al Aqsa Mosque was first utilized a century ago by the Nazi-affiliated Palestinian Mufti of Jerusalem Haj Amin al-Husseini.

In fact, it was al-Husseini’s goal to expel the Jews from Palestine and to prevent any more from arriving. But conventional methods were ineffective in the face of waves of incoming Jewish immigrants and initial British support for the Zionist movement. At the time, the Mufti’s power was weak, and those loyal to him were in the minority. The surrounding Arab countries were still too preoccupied with their own problems following independence from the colonial powers. The Mufti knew he had to do something dramatic to catch the attention of and mobilize the Arab and Muslim world to aid his cause. Continue Reading…