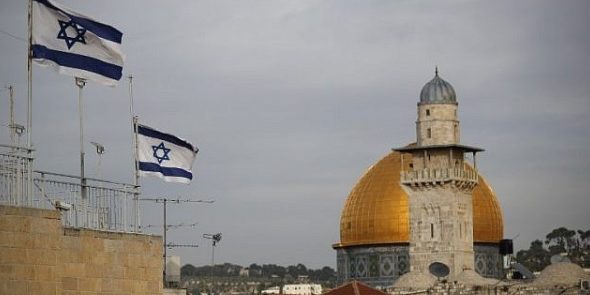 In his essay in Mosaic on diplomacy, law, and Jerusalem, the estimable Michel Gurfinkiel asks, “What is international law?” and comments, “It’s easy enough to doubt, if not to mock, the idea that there is such a thing.” It sure is. The last century of U.S. policy on Jerusalem is a tale of cynicism and sanctimony that makes one wonder whether U.S. officials ever take international law seriously.

The Holy City commanded little international attention in the 700 or so years after Muslims defeated the Christian Crusaders. That changed, however, in December 1917, when British forces captured Jerusalem from the Ottomans in World War I. The city and its holy places became a diplomatic issue. British officials spoke passionately of their duty to keep the city and its holy sites under Christian—and specifically British—control.

Handing it all back to the Muslims was out of the question for the men who led the British Empire. Even those who were pro-Zionist, such as Prime Minister David Lloyd George, couldn’t quite imagine Jews in charge of the city, with authority over the Church of the Holy Sepulcher and the Garden of Gethsemane. Nor was Lloyd George receptive to claims of interest in Jerusalem by the French, whom he scorned as “atheistic” or, in any event, Roman Catholic.

For the 30 years after World War I, Britain administered Palestine. Its officials established Jerusalem, naturally, as the seat of government there. Mostly Protestants, they quarreled with Vatican representatives and Eastern Orthodox Church clerics over various municipal matters, but one thing they all agreed on was that the city could not be entrusted to Muslims or Jews.

That was the origin of the idea that, when Palestine is eventually partitioned between the Jews and the Arabs, Jerusalem should be internationalized.

Partition of Palestine became an urgent matter in 1947 when war-weary Britain chose to relinquish the territory, asking the United Nations to decide its fate. The UN created a committee, which recommended a plan with four elements. (1) Part of Palestine would become a Jewish state. (2) Part would become an Arab state. (3) The two states would form an economic union. (4) Jerusalem and its environs would become a zone outside both new states, a “corpus separatum” under international control; that is, the world’s Christian powers could retain influence over the city. Continue Reading…