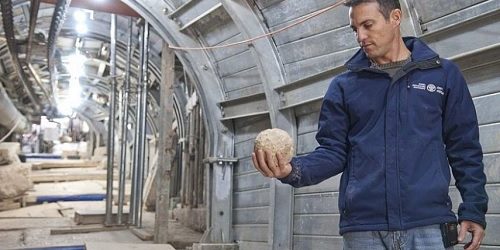 A photo of the U.S. Ambassador to Israel David Friedman and U.S. envoy Jason Greenblatt on July 1 striking a thin, symbolic wall with a sledgehammer—a wall built to separate two parts of the ancient Pilgrimage Road—became the headline of the archaeological site’s inauguration ceremony.

The road is one of the most sensational archaeological discoveries to be made in Jerusalem since Israel’s establishment. On this road, which was remarkably preserved under the ashes of the Roman destruction, many thousands of Jews, according to the historical descriptions, walked to the Temple Mount in Second Temple times, after a ritual bath in the nearby Siloam Pool.

Over the past five years, Israeli archaeologists have uncovered 350 meters of this road, including numerous artifacts that bring to life the last battle in Jerusalem, about 2,000 years ago, between the Jewish rebels and the Romans.

Friedman attended the dedication ceremony not only to express recognition of Israeli sovereignty over the City of David area, but also to admire a magnificent archaeological endeavor of the Israel Antiquities Authority, replete with discoveries. Although this site was dedicated by Israel on June 30, the project began more than a hundred years ago, at an excavation by non-Israeli archaeologists, at a time when the State of Israel did not exist and Jerusalem was under Muslim rule.

Archaeologists from the Israel Antiquities Authority, closely supervised by safety engineers (in line with the world’s strictest standards), have been searching for or excavating the Pilgrimage Road, mistakenly known as the Herodian Road, only since the beginning of the 2000s. But they and the Antiquities Authority are not the first to look for this road or excavate it. Continue Reading….