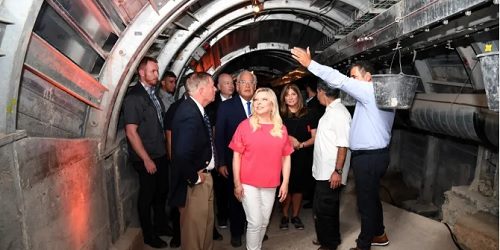 US Ambassador David Friedman and US Middle East special envoy Jason Greenblatt attended the inauguration of Pilgrimage Road in the City of David on Sunday, triggering angry denunciations from Palestinian and left-wing circles for taking part in a “settler project.”

Ministers Rafi Peretz and Uri Ariel, US Senator Lindsey Graham, Ambassador to the UN Danny Danon, Israel Antiquities Authority director Israel Hasson, and US billionaire Sheldon Adelson and his wife Miriam were also among those present at the event.

Friedman wielded a sledge hammer and broke through a wall, ceremoniously opening the tunnel. Palestinians slammed the participation of US officials as recognition of Israeli sovereignty over east Jerusalem.

The event was hotly contested by activists from the NGO Emek Shaveh who argued that, due to its location in east Jerusalem, the decision to excavate the find was motivated by politics rather than searching for historical truth.

“The City of David brings biblical Jerusalem back to life,” Friedman said at the event. “It enables every one of us to stroll the corridors where the ancient prophets of Israel gave voice to revolutionary ideals of freedom, liberty and human dignity.”

“It is our unique privilege as Americans to walk together with our Israeli counterparts on the just unveiled Pilgrimage Road, where our shared ancestors ascended the flagstone steps in prayer and blessing,” he said.

Earlier Friedman and Greenblatt slammed the activists who had protested their cooperation in the event, with Friedman saying that discovery “brings truth and science to a debate that has been marred too long by myths.” Continue Reading….