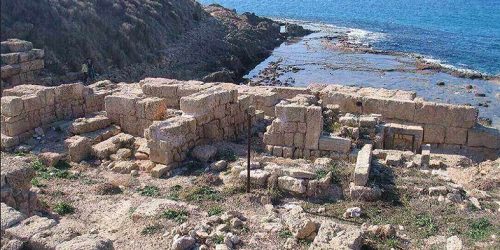 By Steven Law, Patterns of Evidence—

A submerged harbor at the site of Tel Dor in northern Israel has begun to give up its secrets. Archaeologists searching underwater have discovered a massive fortification system built during the wars fought for the control of Israel in the 2nd century BC. The finds give insight to this turbulent period of history and provide clues that even impact the search for the miraculous sea crossing of the Exodus account.

Located about 12 miles south of Haifa, Tel Dor was on one of the few natural harbors in Israel. Researchers recently wrote of their efforts to investigate the archaeological remains in the Journal of Maritime Archaeology. The team was made up of Prof. Assaf Yasur-Landau and Ehud Arkin Shalev from Haifa University along with Prof. Thomas Levy of the University of California.

The investigators were frustrated by the tons of shifting sands that had inundated the bay. Matters have been complicated by the fact that though the structure once was located on the shore, sea levels have risen several feet over the last two millennia, submerging large sections of the site.

Divers originally came across three stones that had once been part of a small wall. ”When we started excavating, we saw that these three stones were actually standing on a huge amount of neatly hewn stones,” said Prof. Yasur-Landau according to Haaretz. Based on the style and makeup of the walls, they linked the structure to building techniques from the Hellenistic period (the phase of Mediterranean history between the Greek conqueror, Alexander the Great, and the emergence of the Roman Empire). Continue Reading….