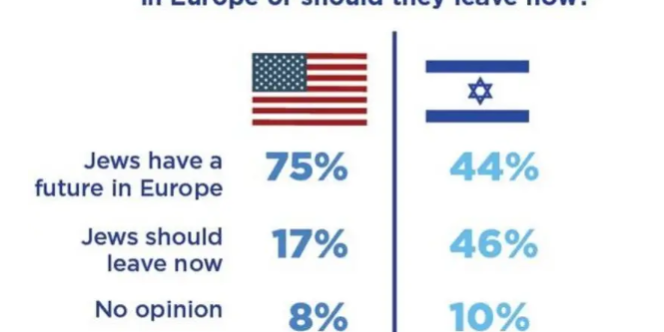 Not even three-quarters (72%) of American Jews and only a little more than half (53%) of French Jews think that a thriving State of Israel is vital for the long-term future of the Jewish people, according to a new study by the American Jewish Committee (AJC).

The AJC on Sunday released its first-ever concurrent surveys of the attitudes of Jews in France, Israel and the United States, the three largest Jewish communities in the world.

In addition to the above findings, the study showed an increase in American and French concern about their own security.

Some 65% of American Jews said they feel less secure than they did a year ago. Similarly, half of French Jews say the situation in France in terms of security is worse than a year ago.

A majority of French Jews (58%) have personally experienced antisemitism, and more than half (56%) say they do not think that France is effectively combating the growing number of hate crimes.

Strikingly, a majority (55%) of French Jews have considered emigrating from the country in the past year for various reasons. Around one-fifth (21%) said it was for economic reasons, 17% for fear of the Jewish community’s future and another 12% are worried about France’s future. Continue Reading…