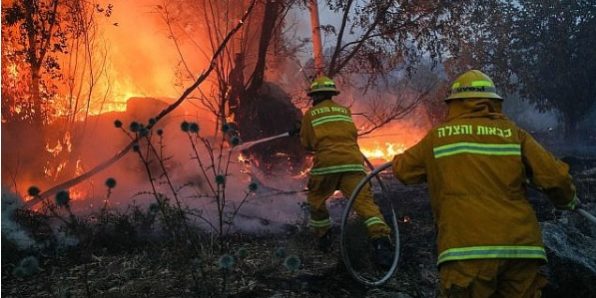 By Jacob Magid and TOI Staff—

Prime Minister Benjamin Netanyahu directed the Foreign Ministry to reach out to nearby countries for “immediate” assistance in putting out the hundreds of fires that were ravaging the country Thursday evening, destroying dozens of houses and forcing the evacuation of some 3,500 from their homes.

Later, the Foreign Ministry said Italy, Greece, Cyprus and Croatia had agreed to send help, but the aircraft would only be able to depart for Israel on Friday morning.

Hours earlier, Public Security Minister Gilad Erdan held a situational assessment and instructed fire authorities to prepare for the possibility that a national emergency be declared, with Friday’s temperatures expected to eclipse 100° F throughout the country.

Erdan later told Channel 12 news that with the exception of several fires near Gaza caused by arson balloons, there were no indications so far of arson.

The largest fire was in the Ben Shemen Forest and around the 250-member community of Mevo Modiim in central Israel.

A police official told Channel 13 news that the blaze had largely destroyed the town established by singer and rabbi Shlomo Carlebach in 1975.

Meanwhile, residents of nearby Gimzo evacuated Torah scrolls from the community synagogue as the flames approached. Continue Reading…