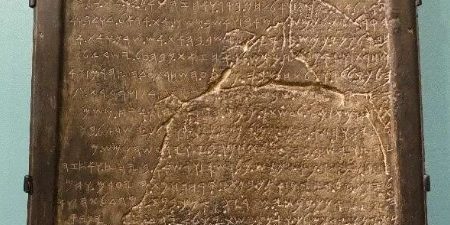 By Steve Law, Patterns of Evidence—

The Mesha Stele, also known as the Moabite Stone, is one of the oldest and most remarkable artifacts connecting biblical history to the ancient world. The stele erected by King Mesha of Moab (modern-day Jordan, east of the Dead Sea) in his 9th century BC capital city of Dibon, tells the story of Israel’s occupation of lands that Mesha considered to be part of Moab. It then commemorates the king’s military victories and building projects.

King Mesha of Moab is also mentioned in the third chapter of 2 Kings in the Old Testament (see verse above). Several other biblical names and events are mentioned on the Mesha Stele with amazing specificity. These will be covered later in the update. But now a new study examining the inscription has reinterpreted one of its most famous lines.

The conclusion of the report is as follows, “…we dismiss Lemaire’s proposal to read (‘House of David’) on Line 31. It is now clear that there are three consonants in the name of the monarch mentioned there, and that the first is a beth. We cautiously propose that the name on Line 31 be read as Balak, the king of Moab referred to in the Balaam story in Numbers 22–24.”

News of this different reading has flashed across news sites around the world, often with sensationalized headlines and overstated claims of the biblical ramifications of this revised wording. As covered in last week’s Thinker about the Lachish City Wall discovery aligning with Isreal’s kings, there is general skepticism in the world of archaeology about the Bible’s account of the early history of Israel. The reinterpretation of the inscription on this stone enters right into that debate.

How does one sort through all of the claims, often from experts in the field, to arrive at thoughtful positions? To make headway on that goal, the available evidence needs to be examined to see if a pattern of evidence fits with a close look at the biblical account. Continue Reading….