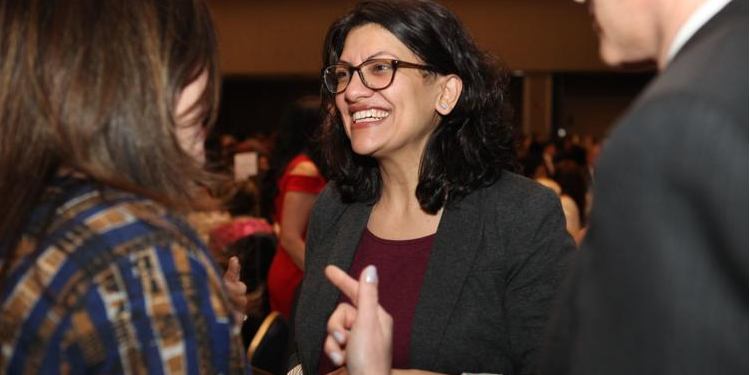 The daily reports of anti-Semitic rhetoric and actual physical attacks on American Jews has become a common occurrence in many American Jewish communities throughout the United States. Despite the denial of most American Jews that I run into during my visits to the tristate area including my current visit; Anti-Semitic rhetoric and physical violence is blatantly condoned and publicly tolerated not only by a small select group of political representatives who have become media darlings and celebrities, but more importantly by mainstream Democratic Party and Progressive political organizational leaders, many of whom are Jewish themselves. This relatively minor and small group of highly visible media personalities are becoming disproportionally tolerant of expressing Anti-Semitic rhetoric empowering Jew haters to act uninhibitedly against Jews anywhere and everywhere. These select and vocal groups of Jew haters have become more brazen, creating a climate that has made anti-Semitism far more permissible and lowers the threshold for Jew haters who take the rhetoric one step further.

Polls show that Americans have a very positive views toward Israel, ranking it among the 10 countries they most favor, above many longtime allies. The greater majority of Americans do not hold anti-Semitic beliefs and do not condone acts of anti-Semitism. Anti-Semitism just doesn’t turn on most Americans. Polls over the years have shown consistently that only a relatively small minority of Americans held anti-Semitic attitudes and that the scope of the problem has remained just that, a marginal challenge. This being the case, how can we explain headline after headline and Democratic political tolerance and complicity in light of anti-Semitic rhetoric broadcasted and printed daily among America’s leading media outlets; the anti-Semitic cartoon this past week in the New York Times being only the latest example of this alarming trend.

Should our conclusion be that anti-Semitic rhetoric and violence is a result of a hate industry operated by small and highly active individuals and groups who are disproportionately affecting and influencing the public discourse and media dialogue. How long can we continue to blame Muslim Congressional freshmen who express a pervasive revulsion of Jews and Israel condoned only because of a pervasive bigotry of low expectations in regard to their behavior and abilities? Can a process of inoculation to Anti-Semitism become a counter balance to the ever increasing mainstreaming of Anti-Semitism by a disproportional small cadre of Democratic Party politicians, veteran Democratic Jewish politicians and progressive leaders?

Last week’s remarks by Democratic Rep. Rashida Tlaib on the Holocaust and the shameless media blitz and public support she received from Democratic House Speaker Nancy Pelosi, encapsulates the problem with today’s Democratic Party and the empowerment they give to blatant Jew haters and enemies of the State of Israel. Last week. Democratic Rep. Rashida Tlaib, made remarks during a Yahoo News podcast interview, stating that the WWII genocide of six million Jews gave her a “calming feeling”. Tlaib began by explaining to “Late Night” host Seth Meyers how many of her ancestors “died” or “gave up their livelihood” to provide that safe haven for Jews, which she wanted to “recognize and honor.” Tliab unapologetically offered her false anti-Semitic version of history and falsely claimed that the Palestinian Arabs welcomed Jews to the Middle East when Palestinian leader Grand Mufti Haj Amin el Husseini was actually an ally of Adolph Hitler, and coordinated attacks that killed tens of thousands of Jews many of which were recent Holocaust survivors. Tlaib was widely condemned by GOP lawmakers such as Republican Senator Ted Cruz, as well as President Trump, who accused her of “tremendous hatred.” The Democratic support and the support of Progressive allies for stating the notion that she was “calmed” by the Holocaust, is at the heart of the mainstreaming and the legitimizing of the rampant anti-Semitism that is spreading across America.

When social media spreads the word of hating Jews and hating the State of Israel, believers from both the extreme left and the extreme right are inundated with messages and narratives within their world of social media that makes it OK to hate Jews. Individuals and groups who constantly seek affirmation for these hated related beliefs and find their redemption through elected political leaders and a major political leader such as Democratic House leader Nancy Pelosi, then it’s a relatively small step to go one step further and fulfill anti-Semitic ideation into acts, crossing the emotional threshold and walk into a Synagogue and shoot up Jews praying.

America has joined many parts of the world in which Jews are increasingly unwelcome. Being a Jew now means risking physical violence. Both Jews and Jewish institutions are being targeted with extraordinary cruelty and viciousness. We hear Israel being compared to Nazi Germany and that the Jews control the world, being the source of the world’s maladies. Jews are seen as carriers of a uniquely trans-generational evil. The return of rampant Jew hatred and violence against Jews has made a huge comeback only because major Democratic politicians and progressive opinion makers such as the New York Times are creating a pervasive atmosphere that empowers both the extreme left and the extreme right to rejoice in their hatred and believe that they are on the same wave length, that their hatred is worthy and meaningful.

The writer, a 25-year veteran of the I.D.F., served as a field mental health officer. Prior to retiring in 2005, served as the Commander of the Central Psychiatric Military Clinic for Reserve Soldiers at Tel-Hashomer. Since retiring from active duty, he provides consultancy services to NGO’s implementing Psycho trauma and Psycho education programs to communities in the North and South of Israel. He was former strategic advisor at the Office of the Chief Foreign Envoy of Judea and Samaria.
To contact: medconf@gmail.com