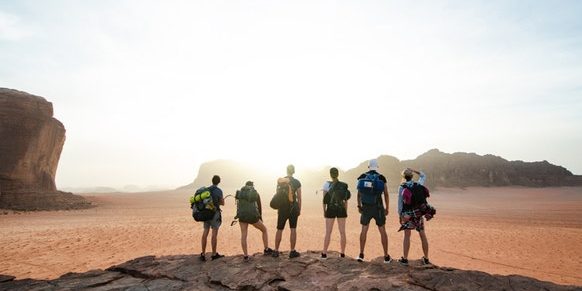 Ibrahim al-Karaki, the mayor of the Jordanian city of Al-Karak, 87 miles to south of Amman, with a view to the Dead Sea, is under attack for hosting Israeli (Jewish) tourists during the Jewish Passover holiday. His critics have accused him of promoting normalization with the “Israeli enemy” and are demanding his resignation.

Al-Karaki is reported to have helped the Israelis cross a valley that is closed to tourists. His other “crimes” include feeding the Israeli tourists and presenting them with plaques of appreciation from the city.

Because of these “crimes,” the mayor has been facing a massive wave of condemnations from angry Jordanians accusing him of engaging in normalization with the “Zionist enemy.”

“The mayor’s actions have sparked anger among many residents, political parties and activists in his governorate,” according to a report in the Jordanian newspaper Al-Rai. “They considered that what the mayor did as a normalization step with the Zionist enemy. They also said that the mayor’s actions contradict our values and moral, humanitarian and religious heritage, and called on him to apologize and submit his resignation.”

Representatives of various political factions and community leaders in Al-Karak held an emergency meeting during which they denounced the mayor for his interaction with the Israeli tourists. At the end of the rally, they issued a statement that said that the mayor “is no longer a representative of the sons of Al-Karak, who reject normalization with the Zionist entity.” The statement also called on the members of the municipal council immediately to resign and quoted a verse from the Koran that says: “O you who have believed, do not take My enemy and your enemy as guardians/allies.” (60:1)

Shortly after the rally, Al-Karak municipal council member Khaled Bkaeen announced his resignation. He was the first council member to resign in protest over the mayor’s “crimes.” Other council members, meanwhile, issued statements strongly condemning al-Karaki for welcoming and helping the Israeli tourists. They said that the mayor had acted on his own and did not represent the city when he met with the Israelis. Continue Reading…