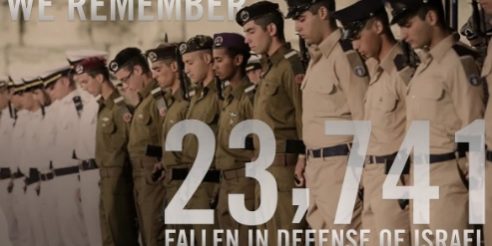 Israelis came to a complete standstill on Wednesday morning to observe two minutes of silence in honor of 23,646 fallen soldiers and 3,134 terror victims.

Sirens blared across the country at 11 a.m., bringing traffic on roads and highways throughout Israel to a halt as pedestrians stopped in place to bow their heads in silence.

A state ceremony for fallen soldiers at the Mount Herzl military cemetery in Jerusalem began immediately following the moment of silence, with both Prime Minister Benjamin Netanyahu and President Reuven Rivlin in attendance.

Speaking at the ceremony, Netanyahu vowed never to allow Iran to obtain nuclear weapons as Tehran announced that it was rolling back its commitments to the 2015 nuclear deal with world powers.

Netanyahu was scheduled to attend another ceremony later Wednesday afternoon in honor of victims of terrorist attacks.

Memorial Day for Fallen Soldiers and Victims of Terrorism is a solemn day in Israel, with over 1.5 million Israelis were expected to pay their respects at the gravesides of those killed in wars or terror attacks throughout Israel’s history in 52 official military cemeteries and hundreds of other smaller military sections in civilian cemeteries across the country.

At ceremonies on Tuesday evening, both Netanyahu and Rivlin told bereaved families that the sacrifice of Israel’s fallen soldiers has allowed the Jewish people to live freely in their homeland and vowed to continue working to return the bodies of fallen soldiers still missing. Continue Reading…