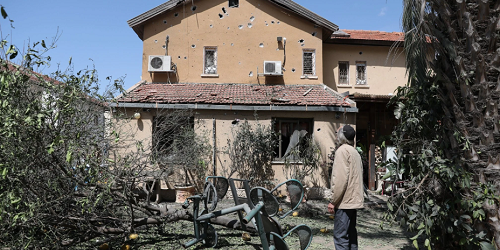 President Trump addressed Sunday the continuing rocket attacks by Hamas and Islamic Jihad against Israel, and tweeted words of support for the Jewish state.

“Once again, Israel faces a barrage of deadly rocket attacks by terrorist groups Hamas and Islamic Jihad,” the president tweeted. “We support Israel 100% in its defense of its citizens.”

He also sent a direct message to the residents of Gaza: “These terrorist acts against Israel will bring you nothing but more misery. End the violence and work towards peace – it can happen!”

Vice President Mike Pence joined the president in voicing support for Israel. He tweeted, “We strongly condemn the attacks in Gaza by Hamas terrorists. Israel has the absolute right to defend itself, and the US stands by our great ally Israel.”

Others in the White House and all the Hill also weighed in on the situation in Israel.

House Minority Leader Kevin McCarthy said that, “Israel has every right to defend itself against the 600 rockets that Hamas has fired during the last 48 hours,” and that the US would continue to stand by its ally.

Similarly, Senator Bob Menendez (D-NJ), a member of the Senate Relations Committee, condemned the attacks and noted that Hamas and Islamic Jihad were demonstrating to the world that they “remain committed to Israel’s destruction and the murder of Jews,” he tweeted.

Rep. Ted Deutch (D-FL), a member of the House Foreign Affairs Committee, was among the first congressmen to address the rocket attack when tweeted Saturday: “Over 250 rockets fired at Israel again by terrorists from Gaza. This must stop now. Israel, like any country, has a right to defend itself against terror attacks.” Continue Reading….