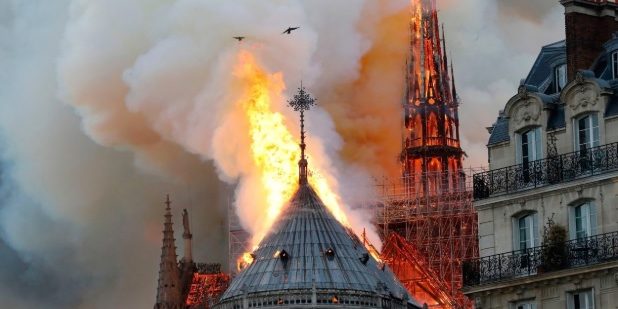 One summer day in 2016, I was having lunch with a French friend in Jerusalem. Because of my interest in religious freedom, she was telling me about persistent disturbances in France’s Catholic Churches – vandalism, arson and obscene desecration of sanctuaries. That evening, to further explain, she sent me links to some church newsletters.

Although there had been a multitude of similar reports about Jewish businesses, synagogues and cemeteries, which was the first I’d heard about such attacks on Christians.

On July 26, I was translating the church reports on-line when a chilling news bulletin materialized on my screen: Islamist terrorists had slit the throat of 85-year-old priest Jacques Hamel, killing him at the altar of his church in Rouen, France. A nun had been gravely injured in the attack.

That day, I wrote for Fox News, “For political and ideological reasons, whenever possible, French politicians (along with many other European authorities) continue to downplay religious attacks. In response, few major media sources bother to report them. Nonetheless, as the jihadi saying goes, ‘First the Saturday People, then the Sunday People.’ Islamist radicals consistently target Jews and Christians.”

Since 2016, attacks on both Jews and Christians have continued to crescendo in France, although many – if not most – have been overlooked. One notable exception were the separate, vicious murders of two elderly French Jewish women.

Then, just days ago, the world watched in horror as the magnificent Notre-Dame Cathedral burned before our eyes, its falling spire eerily reminiscent of the 9/11 horror.

At the time of this writing, although officials almost immediately denied that arson was involved, the cause of the Notre-Dame fire remains in question. Nevertheless, the sight of towering flames devouring Paris’s magnificent cathedral has brought into clear focus countless assaults on French churches and synagogues, as well as religious sites and individuals.

In March, Newsweek reported that in the first two months of 2019, there was a 25% increase in attacks on French Catholic churches. A record 47 documented attacks took place in February alone.

Of course, the question of motivation for such defilements is continuously analyzed by experts. One Vienna-based commentator explained, “The pressure is coming from the radical secularists or anti-religion groups as well as feminist activists who tend to target churches as a symbol of the patriarchy that needs to be dismantled.”

Actually, in several cases where arrests have actually been made, Islamists and anti-Christian Muslims have been the apparent culprits. And CBN News pointed out another essential point, painfully obvious to most observers:
In France, church attacks have increased exponentially as the number of Muslim migrants has enlarged.

In January 2017, a France-24 study claimed, “Islamist extremist attacks on Christians in France rose by 38%, going from 273 attacks in 2015 to 376 in 2016; the majority occurred during the Christmas season and many of the attacks took place in churches and other places of worship.”

Interestingly, in 2016 – the year Jacques Hamel was murdered – three “radicalized” women reportedly plotted to attack Notre-Dame Cathedral in Paris. Their vehicle, containing six gas canisters, was found near the church.

WHILE ATTACKS on Christians surge, antisemitic activities also continue to erupt across France. Just days ago, on April 22, a Jewish couple was brutally beaten and robbed in a “home invasion.” According to officials, four hooded assailants had identified the couple as Jews because of the mezuzah outside their front door. The Algemeiner reports that antisemitism monitors see an emerging pattern of “attacking Jews as close as possible to their homes,” based on “the myth of the Jews and their money.”

Meanwhile, attacks on Jews in France increased by 74% in 2018. In a November CNN report, Francis Kalifat, a spokesperson for the French Jewish community said, “Our first observation is that violent acts are a daily occurrence and they have existed for a long time.”
And while assaults on Jews and Jewish sites persist in France, attacks on Christians and (mostly Catholic) churches escalated to more than 1,000 attacks in 2018 – averaging three per day. Until recently, these incidents have been relatively unknown except among rights groups and church communities.

One can safely say that they’ve been given the silent treatment by the media.

Eldad Beck wrote, “The lesson here should be fairly straightforward: Those who remain silent on the murder and persecution of Christians in distant countries like Nigeria, Syria, Algeria, Indonesia and Sri Lanka will find themselves persecuted at home. While there is no evidence that the Notre-Dame fire was a deliberate act of malice by Muslims, the incident has opened a Pandora’s Box for the silencers and the silent, and sparked a public debate over the persecution of Christians in the very heart of Catholic Europe.”

Those of us who are concerned with religious freedom issues are appalled by the increasing violence against both Christians and Jews, not only in France but far beyond Europe’s troubled borders.

Synagogue shootings in Pittsburgh, and now another in Southern California. Nearly 300 killed and 500 injured in three church attacks in Sri Lanka. Just days ago, an armed attack on Christians near Ramallah – an area under Palestinian Authority jurisdiction.
One frightening international story after another seems to appear nearly every day.

I asked my colleague Nina Shea, Director of the Center for Religious Freedom at Hudson Institute, for her thoughts about why attacks on Christians and Jews seem to be spinning out of control.

“Local minority religious communities are vulnerable to attacks – from a variety of forces – throughout the world, and it is their governments’ responsibility to protect them,” Shea explained.

“When they fail to do so, minority targets will continue to be hit. We saw this happen in Islamist attacks against Nineveh Christian and Yazidi minorities; we are now seeing similar attacks against Christian minorities in Egypt and northern Nigeria.”

“France is a mature democracy, and yet it is following this same pattern by failing, in many cases, to identify and take action after widespread incidents of vandalism, looting and desecration against Jewish and Christian sites, including houses of worship and cemeteries.

“Since October, the US also is seeing an antisemitism crisis develop, thanks to lone wolves and copycats, who are attacking synagogues filled with worshipers.”

“Both France and the United States must find a way to protect their Jewish and Christian communities by preventing such attacks. This requires surveillance of leaders who incite violence; monitoring hate sites online; collecting and acting on intelligence; and shoring up defenses at targeted houses of worship. Finally and obviously, a reliable defense requires following any attack with thorough investigations and prosecutions.”

Lela Gilbert is a fellow at the Hudson Institute, the author of Saturday People, Sunday People: Israel Through the Eyes of a Christian Sojourner and co-author of Persecuted: The Global Assault on Christians.