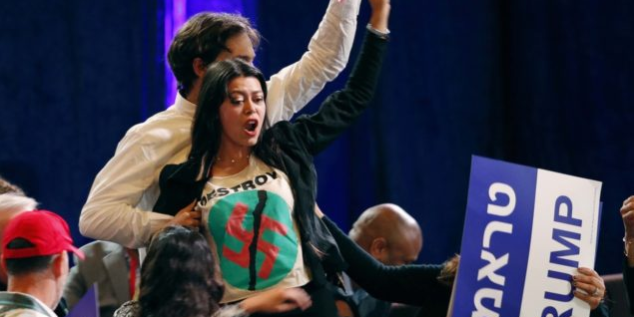 A group of protesters — at least one of whom was wearing a swastika T-shirt — interrupted President Donald Trump’s address to the Republican Jewish Coalition (RJC) on Saturday before being ejected by security.

The demonstrators clambered on top of their seats in the ballroom at the Sands Expo and began chanting slogans against the Israeli “occupation” of the West Bank. (Israel considers the area, which Jews calls Judea and Samaria, to be “disputed,” not “occupied.”)

At least one of the protesters, who happened to stand up a few rows in front of this reporter, was wearing a t-shirt emblazoned with a swastika — perhaps intended ironically, since some of the protesters unfurled a banner against “white nationalism.”

In a scene familiar from Trump rallies for nearly four years, the crowd around the protesters began chanting, “U-S-A!” and “Four more years!”

As the hecklers were removed from the venue, Trump joked about one of them: “He’s going back home to mommy.”

Roughly 2,000 people — including those attending the RJC’s annual leadership meeting, as well as members of the general public — filled the ballroom, many waving signs that said “TRUMP” in both Hebrew and English. Other signs read, “Thank you, President Trump!” and “We Are Jews for Trump.” Some men wore red yarmulkes emblazoned with “TRUMP” or “Make America Great Again.” Continue Reading….